An open letter to the Vice Chancellor of Utkal University 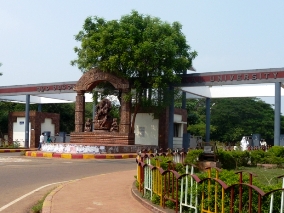 An open letter to the Vice Chancellor of Utkal University, where students’ union elections have been called off, citing violence on the campus.

I congratulate you on your success in reinstalling peace on the university campus. What a farce it was indeed to see young people out on streets for a so-called ‘change’ that the past generation has failed to bring about! How stupid it is indeed to permit mere kids the right to fight elections within the campus. Slow clap at your invincible spirit, Sir. It was almost like tiptoeing around and shutting the door while mosquitoes breed freely in the stagnant pool at your backyard. How cool is that? Smart move!

Utkal University is the 17th oldest university in the country.  I am delighted to inform you that we have managed to preserve its antiquity in every sphere: be it renovation, education, staff or sports. We could put Harry Potter’s Time Turner to shame if Dumbledore could see the rate of decline in the standard of education, outdated syllabus and the forever dwindling number of faculty. While the number of applicants used to be some 2000-odd (per department) a year ago, today we have a mere 700-800 applicants (per department) only.

Talking of the antiquity of our university, I have now begun to believe that the university has a penchant for fascism. This is why the campus has an unhindered growth of forestation, with least interference from artificial lights in the darkness of the night. Few martyrs have shed their blood in the darkness (read violent attacks by non-students thanks to an inefficient security system). The roads are a perfect display of obsoleteness on the campus.

Few departments are extinct while others are almost on the verge of extinction. The day isn’t far when wildlife safaris will take foreigners on a trip across the 300 acres. We could build makeshift tents on the 250 acres as we have utilized just 50 acres for construction of hostels and offices. I see we are going to boost the Odisha tourism like never before in the next few years.  High five!

Of course we are traditional and supporters of equality too. We have made the campus equally unsafe for men and women with the free interference of miscreants and unsolicited political goons. We also prefer hierarchy over democracy since the former allows a chain of rulers to maintain the sanctity of the university unlike the latter that disrupts the peace of the campus through elections.

Non-students, aka goons of the hierarchical rulers need a fitness center to stay fit. They unnecessarily pay Rs 20,000 a year and stay illegally in the hostels. I am humbled at their big hearts. But wait, I have an idea! The library is full of outdated books and hardly produces a negligible number of scholars or civil servants. Now that we have no elections, at least these goons can help you maintain the peace within the campus. So I urge you to vacate the Parija library immediately and turn it into an ‘akhada’ for these goons who have selflessly worked to stagnate development in the campus. It is because of these great people that funds mysteriously vanish and authorities remain inefficient.

By the way do you still stick to the idea of the ‘think tank’ that you promoted since the day of your joining? Of course, experiments fail. So did the tank! It failed to work. Please don’t be under the impression that you diffused the tank. We don’t blame you at all. The “system” diffused the tank. We all have been mourners and victims. And they made you one too.

A month ago, I was super-excited to be an agent of change, the voice of my friends in the university. Yes, I was an aspirant of the upcoming Utkal University students’ union elections.  But all of a sudden I realized, we were portrayed as some shenanigans who were hell-bent on disturbing the eerie silence of the snoring chambers of our university.

Sorry! Were we too loud? Did you leave us with any alternative?

You justified violence as the reason for cancelling the elections. Sir, you forgot to specify that it was violence by a Particular group of goons,who have been ruling over here in hierarchical order. You and me, both know that it is the the ruling party who was scared of losing the elections. And that is precisely why the elections were called off. And we call ourselves an “autonomous” university. Joke!

Things did not change in the past. But let’s imagine, just for a minute, what would happen if they do in the future? I can vouch that we could be at par with any JNU or DU which produce innumerable student leaders every year.
Elections are an agent of change. Young and fresh spirits can only bear the burden of reforming the laid-back attitude of the system.

You, dear Sir, were for us the first stroke of change with modern perspectives. And ‘Captain, O My Captain’ all you need is a team, the voice of youth that will be your armour in the war, a tool to restore your think tank. Utkal University students’ union is the fire that you need to reignite the tank. Trust me, it’s worth the try.

Or do you still prefer to be one of those tourist guides of a wildlife safari? Never mind! I was kidding? ROFL. Or was I really kidding?

I, being a woman, had the guts to fight the elections by venturing into a male-dominated bastion and I was bloody proud of it. But today, I am ashamed that I cannot gather enough courage to write my name at the end of this letter. You know why, Sir? Because I AM SCARED. This is what it has come down to.

Bigg Boss’ practice match for me as director: Rimi Sen