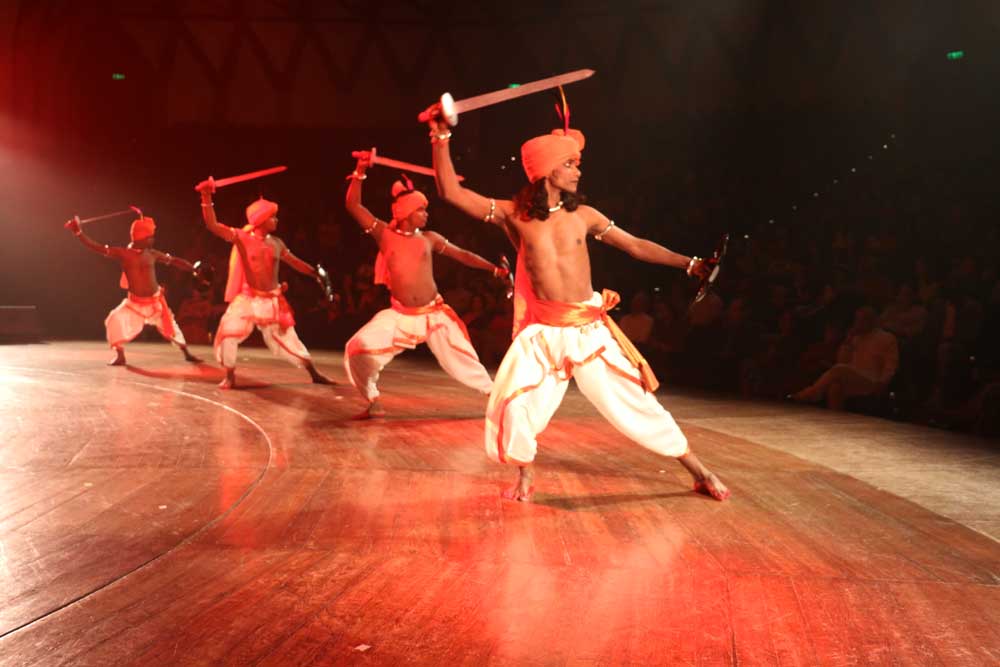 Bhubaneswar/Baripada: The energy they bring to the stage with expansive use of the whole body and lyrical strength of the movement techniques reignites the hope that all is not lost with Mayurbhanj Chhau of Odisha.

The virile strength and elastic softness of the war dance of the princely state of Mayurbhanj is living and growing with the 40 dancers of Mayurbhanj Chhau Performing Unit (MCPU), an initiative of Chhau dancer Subhasree Mukherjee and the district administration, to create a group of artistes with proper training and grooming for national and international performances.

The MCPU’s first production ‘Pratibimb’ choreographed by Kathak danseuse Shama Bhate from Pune, an infusion of Chhau movements with the sensibilities of Kathak in expression and music, will be staged at National Centre for Performing Arts in Mumbai on January 28, Lalit Kala Kendra, Pune, the following day  and IISER, Pune, on January 30.

This elaborate and stylized, rustic yet sophisticated and liberating form of entertainment has witnessed other such collaborative efforts in the past couple of years under Project Chhauni.

“With Santosh Nair from Delhi and Subrat Pattnaik from Bhubaneswar, the traditional Chhau dance items like ‘War Dance’, ‘Sabara Toka’ and ‘Dandi’ were given a contemporary feel,” said Subhasree.

The beauty and vigour of Chhau found expression in theatre with live performance of traditional rituals core to indigenous Indian culture in collaboration with Oroon Das of Asian Heritage Foundation, New Delhi.

“We are also collaborating with Dr. Ileana Citaristi for choreographic productions like ‘Panchabhoota’ and ‘Jarjara’,” she added.

Performing Chhau is like creating poetry in space and these collaborations help expand the expanse of the dance form. “There is immense talent in the district, what the dancers lack is presentability and aptitude. The performances are confined to rural areas and they don’t get a chance to exhibit their skills on national and international platforms, while those practising Chhau in other parts of India and world over are winning accolades,” said Subhasree, who is among the first few female Chhau dancers from Baripada.

The project which was launched, on May 19, 2016, by former Mayurbhanj collector Rajesh Prabhakar Patil at Baripada, aims at tapping in these talents, training them well, experimenting through collaborations and presenting the true form on world stage, while helping the artistes from the rural belt earn recognition and proper remuneration. Centres have also been set up at Rairangpur and Karanjia.

“We feared losing the rich repertoire of Mayurbhanj Chhau with the aging artistes. Therefore, a survey of artistes practising Chhau in the district was conducted. A standardized curriculum was prepared after documenting 216 Chhau techniques over a period of more than 45 days. We also digitally recorded the music of 80 dance items,” she said.

To train the next generation of dancers, Mayurbhanj Dance Academy was started. “The young boys and girls are being trained in Chhau techniques by Rama Chandra Das and Deb Narayan Dhad, who are excellent dancers of past era,” she said.

The academy has also engaged senior music gurus like Bighnaraj Dhada and Bideshi Baitha. “The aim is to train the Chhau enthusiasts at village and block level while providing senior artistes a source of income as lack of patronage has driven many to give up playing the traditional instruments,” she said.

However, bringing these artistes and dancers together was no mean task. “Most of the young boys are married and burdened with huge responsibilities. Many among them are farmers, carpenters, auto drivers and daily wage labourers, who slog all day and hardly get any time to practice the dance form,” she said.

Despite these challenges, what keeps Subhasree going is her immense love for Chhau. “I don’t want the dance to die an unnatural death in its own land. While people outside Mayurbhanj are practising it professionally, here the approach is casual since the artistes are not sure if it can earn them a living. This needs to change and MCPU is slowly making strides in that direction,” she added.

Meet the first Dongaria Kondh woman to get passport in Odisha