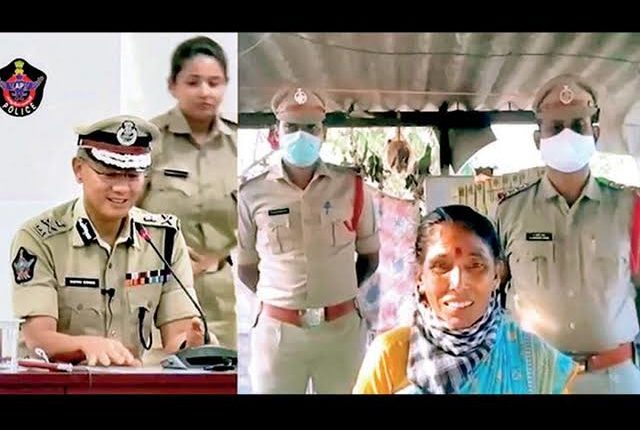 Andhra Pradesh: Demonstrating through her action that kindness is fueled by a golden heart and not heavy bank balance, a woman daily wager in East Godavari district of Andhra Pradesh offered two bottles of soft drinks to some on-duty police officers on a bright sunny day.

The woman received a ‘salute’ from the state Director General of Police (DGP) for her goodwill gesture.

Recently, internet was swoon over a video in which Lokamani, a daily wage worker, was captured offering two large bottles of soft drinks to on-duty police personnel. During an interaction on the spot, the deputies found out that she earns Rs 3,500 monthly, with which she runs her family including kids.

Touched by the benevolent gesture of the woman, the cops thanked her and insisted her to take the soft-drinks home for her children. They also offered her two more small soft-drink bottles for her kids.
Soon after the heart-warming scene caught the attention of Andhra Pradesh DGP Gautam Sawang, he decided to thank the woman in person.

The lady who bought 2 cold drinks for the police on duty from her salary of Rs 3500 gets DGP Salute https://t.co/hLsa2d36BG
Very touched by her gesture,cops returned the bottles gave her two bottles from their bags for her children. #HumanitysHeroes #Salute4ServingHumanity pic.twitter.com/DJG7sj0tyB

Following the DGP’s order, the local cops searched for Lokamani and later brought her in for a video conference with him, who was ready with a bench of other police officials.

Lokamani had no idea about what was planned for her but her eyes glittered when she found out.
The DGP, through the video call, saluted the woman for her thoughtful gesture and motherly love for the on-duty cops. Addressing her as ‘Amma’, he thanked Lokamani and told her how her act of kindness touched him and all the police officials.

The smile and humility on Lokamani’s face at that moment was indeed priceless.