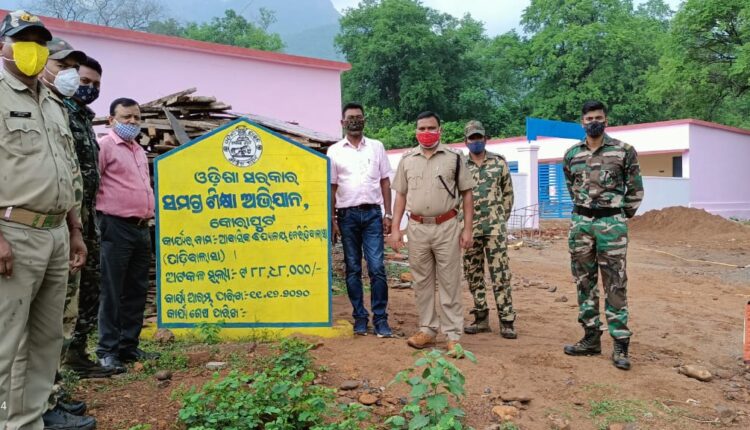 Koraput: Amidst ongoing dispute between Odisha and Andhra Pradesh to claim jurisdiction rights over Kotia Gram Panchayat under Pottangi Block in Koraput district, the neighbouring State opposed construction of a school and temple in bordering villages.

According to reports, a school construction and repairing of an existing school project was underway by Odisha Government at Tadibalsa village in Kotia at an estimated cost of Rs 1,18,98,000.

Amid jurisdiction dispute with Andhra, Odisha CM launches basket of projects for Kotia

However, a few police personnel of Andhra Pradesh interrupted the construction work claiming that the village comes in Andhra periphery.

The concerned contractor informed it to the JE who later brought the matter into notice of the Koraput Collector for intervention.

Source said that the construction work resumed in the village following the discussion between Koraput and Vizianagaram Collectors over telephone.

By the order of Koraput Collector, Pottangi Tahasildar Haripada Mandal along with IIC Koubalya Seth reached the site in Kotia and monitored the situation on Saturday.

On Friday, the Andhra authorities had opposed construction of a Jagannath Temple at Nerellavalasa, a bordering village in Koraput district.

According to the media report, at least 20 construction workers were engaged for the construction of the temple and they were to complete the structure in three hours.

“According to the Supreme Court verdict, nobody has the right to construct permanent constructions in the disputed region. However, people of Odisha violated the verdict. We stopped the temple construction on Friday evening,” the national Daily quoted Andhra official Srinivasarao as saying.

Watch: Here’s what Lionel Messi did after winning Copa America