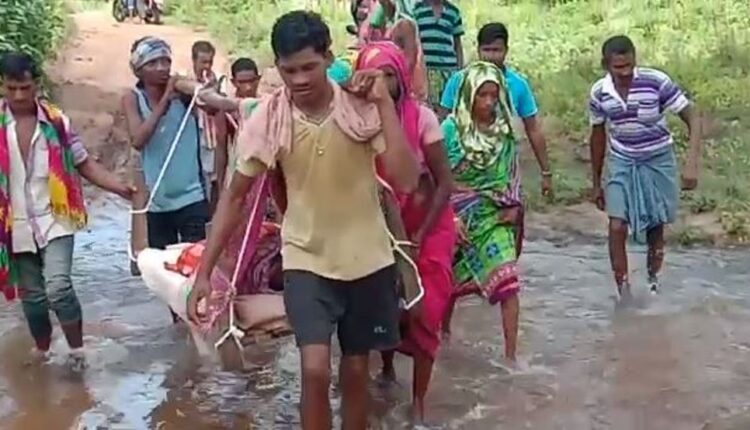 Chandahandi: Even though the Odisha government is claiming of ensuring better healthcare services and rural infrastructure in villagers in the State, incidents of expectant mothers and critically ill patients being carried on a cot or in a sling for kilometers from their villages are being reported every passing day.

One such incident was reported from Bhelukote village under Patakhalia panchayat in Nabarangpur district today. A pregnant woman, Bodei Santa from Bhelukote she went into labour today morning.

As there was no motorable road to the village, an ambulance could not reach Bodei. With the help of villagers, family members of the pregnant woman carried her on the cot for three kilometers up to an auto-rickshaw. The woman was then taken to the Chandahandi Community Health Centre where she delivered a baby boy.

Earlier, on September 15, another pregnant woman from Gaurajharia village under Patakhalia panchayat under Chandahandi block was carried on a cot with the help of an ambulance driver. On the way to the ambulance that was waiting some kilometers away from her village, the woman gave birth to a baby in the jungle.

The incident was highlighted on the media but anything concrete is still to be done on the part of the government to address the issue.

Odisha: Two held for smuggling huge quantity of bhang in…