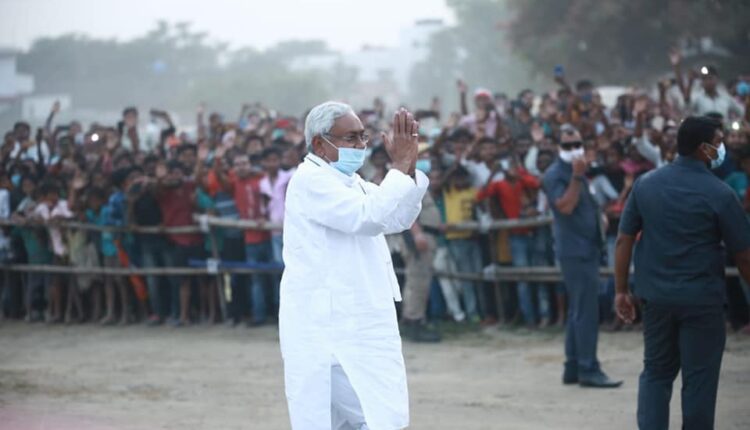 Patna: Jyoti Basu of West Bengal and Pawan Kumar Chamling of Sikkim may have served longer as Chief Ministers, but with the NDA returning to power in Bihar in 2020, Nitish Kumar will take oath for the 7th time in 15 years.

Defying a strong anti-incumbency in the state, the Janata Dal-United leader’s return to the helm — al beit riding on Prime Minister Narendra Modi’s popularity — got most exit polls wrong, it was a matter of touch and go as the Grand Alliance sailing on a Tejashwi Yadav wave nearly tilted the NDA boat.

However, unlike previous cases, Kumar’s ‘big brother’ tag is gone where a powerful and macho BJP with 74 seats has dwarfed JDU, which could barely accumulate 43 seats.

After the final result of the Election Commission, the NDA won 125 seats.

Though the BJP is well ahead of the JD-U in terms of performance, the party’s top brass made it clear well ahead of the election that Nitish Kumar will be the Chief Minister, regardless of who wins more seats.

Senior JD-U leader KC Tyagi says, Kumar will once again be the chief minister of the state. “I express my deep gratitude to the people of Bihar for showing their faith to this alliance.”

BJP’s Bihar Chief Sanjay Jaiswal said, when the PM has made it clear, there’s no room for speculations.

Amit Shah also spoke to Nitish Kumar over the phone on Tuesday, however, the content of the conversation remains unknown.

While Naveen Patnaik has been the Chief minister of Odisha for 5 terms, Shivraj Singh Chouhan four times in Madhya Pradesh, Sikkim’s Chamling (1994 – 2019) has been the longest serving chief minister in the country bypassing Jyoti Basu’s reign in Bengal (1977 to 2000).

When Nitish Kumar takes oath, it will be his seventh time.

At the turn of the millennium, on March 3, 2000, Nitish Kumar, then Samata Party leader was sworn in as Bihar CM.

In 2015, he took oath as Bihar CM twice. The former was after a sweep by JDU-RJD-Cong alliance. Later, in 2017, he broke away and joined hands with old ally BJP to take oath as CM for the 6th time.

As the result day progressed on Tuesday, even though Nitish Kumar’s party was cautious enough about celebration, large posters saying, “Bihar has chosen 24 carat gold” came up outside the party headquarters in Patna.

In Nitish 7.0 the unwritten splash on the walls will be that BJP is the big brother, irrespective of who the CM is. No wonder a poster of Modi and Kumar came up at the JD-U office, talking about “government of double engine” rather than shining the light solely on Nitish Kumar.

“The government will be formed by NDA which will be under the leadership of Nitish Kumar and with the blessing of Narendra Modi,” said BJP MP and its star campaigner in the election Manoj Tiwari, signalling the reworked power equation.

Be as it may, Nitish Kumar coming back to power for the seventh time, beating a Himalayan anti-incumbency, is a statement in itself.

A large poster outside JDU office, saying, “Bihar me fir se Nitish Kumar ba”, now mocks all those naysayers who wrote a political epitaph for the 1951-born in Bakhtiyarpur of Patna Sahib.