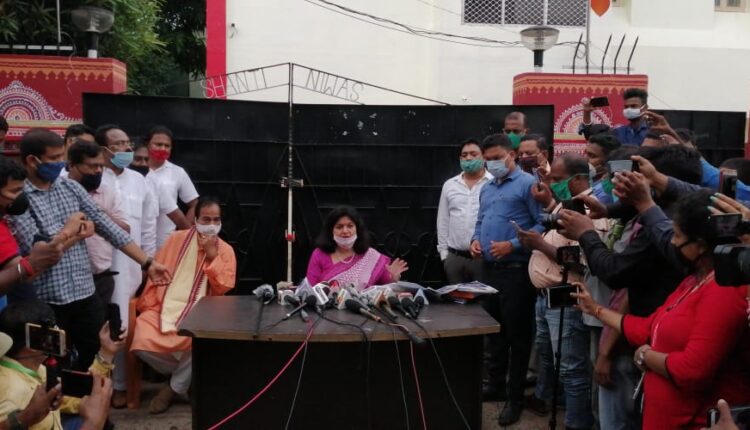 While she praised the Bhubaneswar Municipal Corporation (BMC) for quick action by sealing her office in Bhubaneswar on grounds of congregation and violations of COVID-19 guidelines, she raised question on intention of the civic body for its selective nature and action to enforce the rules even as the guidelines have been reportedly violated by the Biju Janata Dal (BJD) leaders frequently on several occasions including Pipili MLA Pradeep Maharathy’s funeral event in Puri.

“I have come across innumerable instances of violation of COVID-19 regulations at the BJD party headquarters as well as by the ministers, MLAs and party workers. While no action has been initiated against such violations, the sealing of my office that too without detection of a single Covid positive case in my office or among my supporters who were present in the office, does deserve answers from your Government,” the bureaucrat-turned-politician wrote.

Dragging attention of Patnaik over the issue and seeking strong action equally as has been taken against her on same grounds, Sarangi enclosed specific evidence of COVID-19 rules violations made by the BJD leaders.

“The action of sealing office of a sitting MP smacks of partiality and vindictiveness. Given the flagrant violations at BJD party office, I would also be looking at when the BJD party office will be sealed,” Sarangi said in the letter.

Worth mentioning, the BMC has recently sealed her office for a period of 15 days on charges of violating COVID-19 rules after a video of her birthday celebration went viral on social media.

Even, Home Minister Captain Dibya Shankar Mishra (MoS) raised the issue with the Centre seeking action against the BJP parliamentarian.

Following the allegations and BMC action, Sarangi stood firm without regretting over such violations.

Addressing a presser two days ago, she challenged the BMC and BJD making it clear that she will run her office on streets.

The same she also mentioned in the letter to Patnaik.

“The sealing of my office is intended to prevent me from discharging my responsibilities as a Public Representative and I am now forced to hold my office on the roads of Bhubaneswar for next 15 days. Under any circumstances the wheel of progress/development will not stop,” the letter read.

Now use Amazon pay for your Uber rides in India