INDIAINDIA & BEYOND
By Sambad English Bureau On Mar 9, 2021 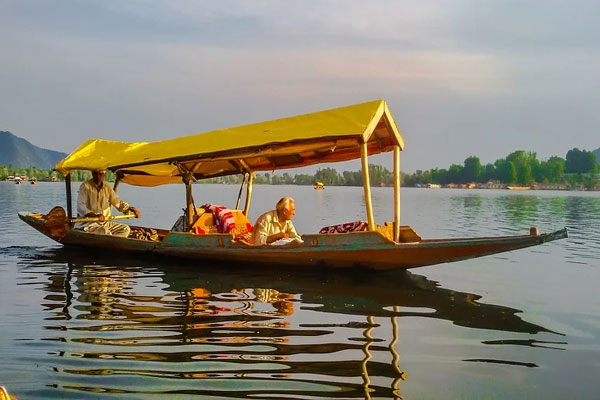 Srinagar: The plight of Kashmir’s houseboats, once called the floating palaces on the pristine waters of The Dal Lake, today hangs in a precarious balance.

It is an archetypal case of the resident coming in direct conflict with his residence!

Once known for its crystal clear waters on which the houseboats floated majestically, the Dal Lake in Kashmir’s capital city, Srinagar, is today dying a slow death.

Its waters have become murky, polluted and unfit for drinking and even bathing.

Reports of bathers getting a skin rash after swimming in this Lake have raised alarm even when the government is spending millions to retrieve the Lake, both from pollution and human encroachment.

Experts say that from its original area of 22 square miles, Dal Lake has shrunken to less than 10 square miles.

“The reason for the shrinking of this Lake is encroachment as more and more landmasses have come up inside the Lake”, said Dr. Ashok Pandita, who has done exhaustive research on the ecology of this Lake.

Pandita does not blame the houseboats and the fishermen who live inside the Lake for its present plight.

He says there are multiple factors that have led to the degradation of the Lake.

“The houseboat owners and the fishermen living inside the Dal Lake are an integral part of the Lake’s ecosystem. You cannot claim to have preserved the Lake by removing its dwellers.

“Removing houseboat owners and fishermen from the Lake in the name of preserving it would be like removing the tiger from the forest to save its ecosystem,” Pandita said.

He, however, asserted that the number of houseboats and the population of fishermen should be kept under check to prevent their explosion inside the fragile ecosystem.

He asserts that the number of houseboats has in fact come down over the years instead of any increase in their numbers.

Abdul Hamid Wangnoo, whose family has been in the houseboat business since the 19th century, is the president of the houseboat owners association.

Dia Mirza locks horn with Sambit Patra over his comments…

“A decade back, we had 1500 houseboats and today there are just 950. Since the authorities are not allowing any repairs of these, more are likely to rot and sink till a time comes when there would be hardly any left,” Wangnoo said.

He said instead of saving the Lake, the developmental projects undertaken by the authorities have laid emphasis on laying roads around the water body that have choked the inflow of freshwater from perennial springs into the Lake.

“There is complete apathy by the authorities towards the houseboat industry. The government policy is not clear at all. We have approached the central government, but so far there has been no positive development.

“If the present situation continues and we are not allowed to go ahead with annual repairs and renovation, there would be no houseboat left in the Lake after 15 to 20 years,” said Wangnoo.

Wangnoo’s claim that houseboats are not the real culprits in polluting the Lake is supported by Dr. Pandita.

“There are four major STPs installed by the authorities to protect the Dal Lake. Due to frequent power failures especially in the winter months, these STPs do not function optimally.

“Our research has shown that most of the time the STPs block the entry of just 20 percent pollutants while the rest pour into the Lake.

“Authorities must ensure proper sanitation and drainage of the houseboats instead of allowing this historical legacy of the Lake to die a neglected death”, Pandita said.

Is the unenviable plight of the houseboat owners is ultimately going to cost Kashmir its famous tourist destination?

90-year old, G.M. Butt, the owner of Clermont houseboats in the Nigeen area of Srinagar city is a confused man.

“I am not keeping well. Have to see a doctor today. My health is as failing as that of the houseboat industry. I can’t say much this time,” Butt said.

The photo gallery at Butt’s chain of houseboats is in fact the pride of Kashmir’s houseboat industry.

Unless the authorities come to the immediate rescue of Kashmir’s houseboat industry, Butt’s houseboats including hundreds of others would go down to the bottom of the Lake taking along with them the proud history of having played host to some of the most celebrated names in the World.