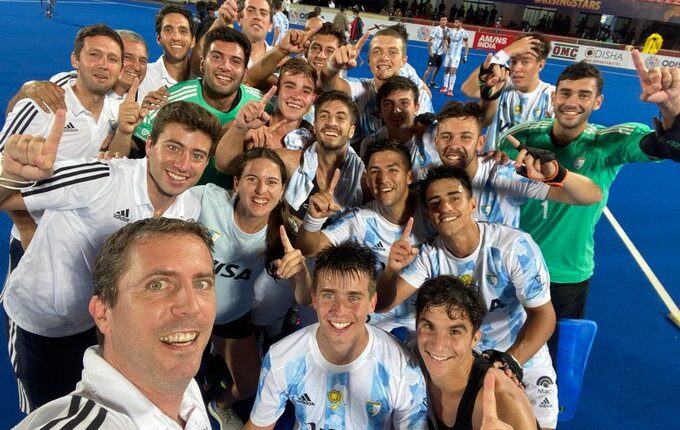 Lautaro Domene, who scored all three of Argentina’s penalty corner chances, was named Player of the Match. In the last minute, Agostini sealed the championship trophy with his brilliant goal.

For Germany, Hayner and Phandt scored a goal each, but that was not enough to stop Argentina to win the final.

The final match was a see-saw affair between the two power-house of Hockey. But Argentina in the first and second quarters were very clinical, did not give much space to Germans for their attacking hockey.

Domene scored the first goal in the 15th minute when Germany were down with one player. Germany’s Hayner had to leave the field after getting a yellow card when he clashed with Toscani.

Domene again scored a goal in the second quarter when Argentina got a penalty corner and he flicked it into the German goal post. In counter attack Germany’s Schachner had a glorious chance, but Argentina blocked him successfully.

After succeeding in the two goals, Germany were literally camped in the Argentina half but did not get the chance to break the defence.

Back in the field after a 10-minute suspension, Hayner opened the account for Germany. And Phandt leveled the score for Germany through the penalty corner. However, it was short lived joy for Germany when Domene scored his third goal through a penalty corner. It was Domene’s hat-trick that brought Argentina back in the lead and then in the last minute, Agostini sealed the championship trophy with his brilliant goal.

Earlier, India suffered a crushing 1-3 defeat against France in the bronze medal match.
French captain Timothy Clement converted three penalty corners for France in the 26th, 34th and 47th minutes to lead his side to a podium finish while for India, Sudeep scored only one goal in the 42nd minute.

This match was a chance for India to avenge their 4-5 defeat against France in their tournament opener. However, the European side continued to dominate the hosts.

Jewellery worth over Rs 1 cr burgled in Bhubaneswar