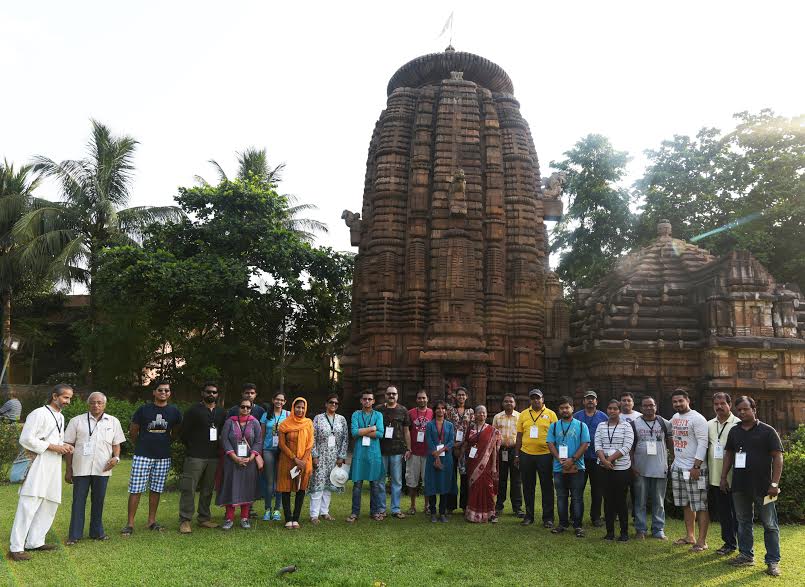 International art historians and conservationists from Jatin Das Centre of Arts (JDCA), professor from IIT Bhubaneswar and tourists from Kerala, were among the visitors today at the 23rd Ekamra Walks in Odisha capital.

Fannie, a art conservationist from China, currently working with the Siddharth Das Studio in Delhi for the development of a unique museum in Bhubaneswar under the Jatin Das Centre of Arts, said “My experience with Ekamra Walks is marvelous and I would look for more such exposure in future.”

Fannie was with her two other friends Sonam Ranawat and Chiara Tomiani and all are working in different capacities for the development of JDCA. While Sonam, an interior designer will work for the internal design and display of the art objects inside JDCA, Chiara, from Italy will work as an art historian for the museum project, which would restore various antique art objects for the display.

It can be mentioned here that already JDCA has got a huge collection of antique hand fans collected from different parts of India and they are now in Delhi and Nayapalli and the conservation and design team of Fannie, Sonam and Chiara will work on their documentation, preservation and display aspect in the first phase of the JDCA project.

Sonam and Chiara also expressed their happiness over the unique heritage walk in the Old City of Bhubaneswar, the temple architecture and unique carvings on the walls of the ancient monuments.

Professor KR Srivatsan, professor with School of Electrical Sciences, IIT Bhubaneswar, who was part of the 23rd Ekamra Walks, said “Odisha and especially Bhubaneswar is a storehouse of ancient monuments and there is a need for its proper projection and propaganda in the Western nations so that more and more people could come and explore the monuments.”

Saying that even the non-resident Odias fail to learn a little about the ancient monuments about our cultural traditions, Professor Srivatsan, said “With a long association with Odisha for nearly half a century has made me so attracted about the heritage that if proposal is given I can guide the agencies concerned to have online courses for foreign universities on our heritage as part of their general knowledge studies so that people outside would know more about Odisha.”

Professor Srivatsan’s Seattle-based son was with him and enjoyed every bit of Ekamra Walks. The IIT professor is married to an Odia from Berhampur and belonged to a family from Tamil Nadu, who has made Odisha their home much before the Independence.

Sunil Kumar, a history teacher from Calicut in Kerala came with his wife and two beautiful kids to explore the monuments through Ekamra Walks. “I am surprised to see so many monuments within such a small area and the city is really worthy of being named as the Temple City,” he said. Kumar’s wife Reji P.R., who also teaches history, was also happy to see the monuments and the cultural traditions of the Old City Bhubaneswar.

The major attraction at Art Vision today was the live music and playing of instruments and Odissi singing and dancing. On other occasions the dance recitals were done along recorded tracks.