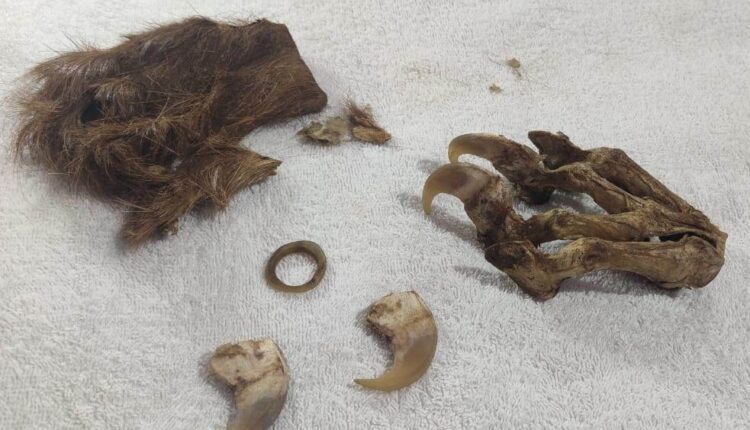 Bhubaneswar/Sambalpur: Based on a tip-off, officials of the Hirakud Wildlife Division have arrested one person for allegedly selling wildlife articles belonging to schedule species. Four leopard nails, leopard claw, skin of wild dog, hair of wild dog and ornament made up of pangolin scale were recovered from the person.

A forest official said leopard, wild dog and pangolin are endangered species protected under Schedule-I of the Wildlife Protection Act. The accused, identified as Akash Agrawal from Sambalpur district was arrested on August 18.

Divisional Forest Officer (DFO) of Hirakud Wildlife Division, Anshu Pragyan Das said, “On receipt of information from an informer a joint raid was conducted by officials of Hirakud Wildlife Division and Sambalpur district police. The joint team nabbed Akash who was acting as a middleman. The arrest was made while he was finalizing a deal to sell the articles. The accused has been forwarded to the court, the DFO added.

The forest official further informed Akash was selling the leopard nails in the name of tiger nails to a buyer at Rs 5,000 per tiger nail.

The DFO said it is believed that tiger nail will bring prosperity and good luck to a person who wears it as ring or necklace. He added many middlemen are involved to procure wildlife articles from people living in and around Debrigarh wildlife sanctuary.

Different species of wild animals can be sighted in the 383-sq-km Debrigarh wildlife sanctuary under Hirakud Wildlife Division.

The Hirakud reservoir acts as a perennial source of water for the wild animals of the sanctuary. Species like Bison, Chousingha, Nilgai, Leopard, Sambar and spotted Deer are commonly sighted.