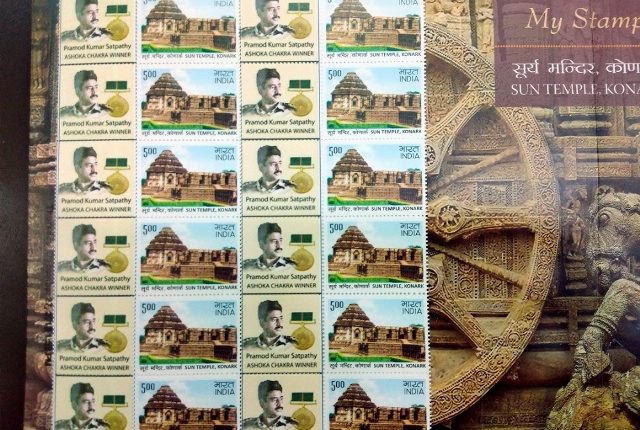 Keonjhar: Setting an example for others, the Keonjhar police honoured the Ashok Chakra awardees khaki-clad personnel martyred for the nation with postage stamps.

In collaboration with India Post, the district police on Saturday issued 10 postage stamps under ‘My Stamp’ scheme in memory and honour of the bravery and sacrifices of police personnel.

Along with the pictures of the police personnel, the Rs 5-stamps feature the Konark Sun Temple in the background.

Among 10, brave khaki personnel from Odisha Pramod Kumar Satpathy has also been recognised in the stamp for his sacrifices. He was the Assistant Commandant of Special Operation Group of Odisha Police. He was martyred in 2008 Naxal attack. He was awarded the Ashok Chakra on Jan 26, 2009.

The police personnel, who sacrificed their lives for the nation, have remained unsung for the common people. The Keonjhar police took the initiative to honour those police personnel so that people can remember them as heroes of the country, said Keonjhar SP JN Pankaj.

After ‘filmy’, Odisha police gets ‘sporty’ to promote road…