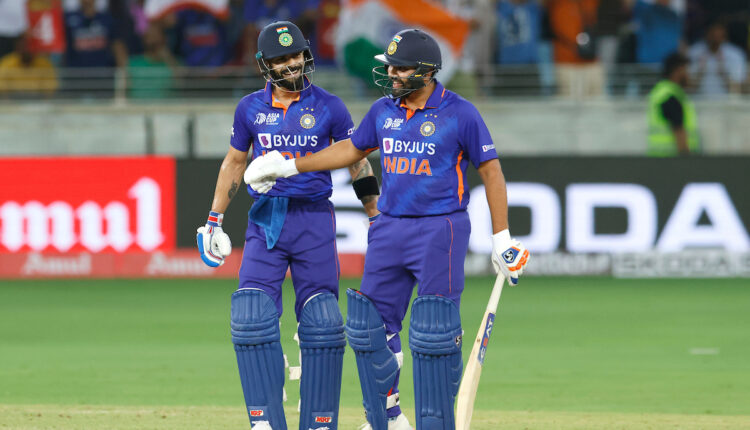 Dubai: India skipper Rohit Sharma was a pleased man after India won an absorbing Asia Cup Group A match against Pakistan at a packed Dubai International Stadium, saying that he would take this five-wicket win any day over usual wins.

With the ball, Pandya got India vital breakthroughs with his short balls to pick 3/25 in his four overs while senior pacer Bhuvneshwar was excellent in starting and death overs to take 4/26 to bowl out Pakistan for 147. With left-arm pacer Arshdeep Singh taking rest of the two wickets, it also marked the first instance of Indian seamers taking all 10 wickets in a T20I match.

“Halfway through the chase, we still knew that we can win irrespective of the situation. We had the belief and when you have that belief, these things can happen. It’s about giving clarity to the guys so that they know their roles well. It was a bit challenging but I’ll take wins like this any day over usual victories. Yes, they (India’s pace bowling) have come a long way in the last year or so and they have adapted well to different situations,” said Rohit after the match.

Rohit heaped huge praise over Pandya’s all-round abilities since he came back into India’s scheme of things in June this year. “Since the time he (Hardik) has made his comeback, he’s been brilliant. When he was not part of the team, he figured what he needs to do to his body and his fitness regime, and now he is clocking 140-plus easily. His batting quality we all know and it’s been brilliant since his comeback.

“He is a lot calmer now and more confident about what he wants to do, whether it’s with the bat or with the ball. He can bowl really quick, we saw that today with those short balls. It was always about just understanding his game and he’s doing that well now. In a high-pressure chase with 10 runs per over needed, you can panic but he never showed any of that.”

Pakistan skipper Babar Azam too was in awe of Pandya’s all-round abilities while admitting that his team fell 10-15 runs short with the bat. “The way we started (with the ball), was great. We were about 10-15 runs short. Bowlers did really well to make a match of this. Our tail did step up a bit to add those handy runs.

“Thought was to take the game deep (and hold back Mohammad Nawaz’s last over). Idea was to create pressure but Hardik finished well. He (Naseem Shah, debutant pacer) is a very young bowler but bowled so well, and showed so much aggression.”