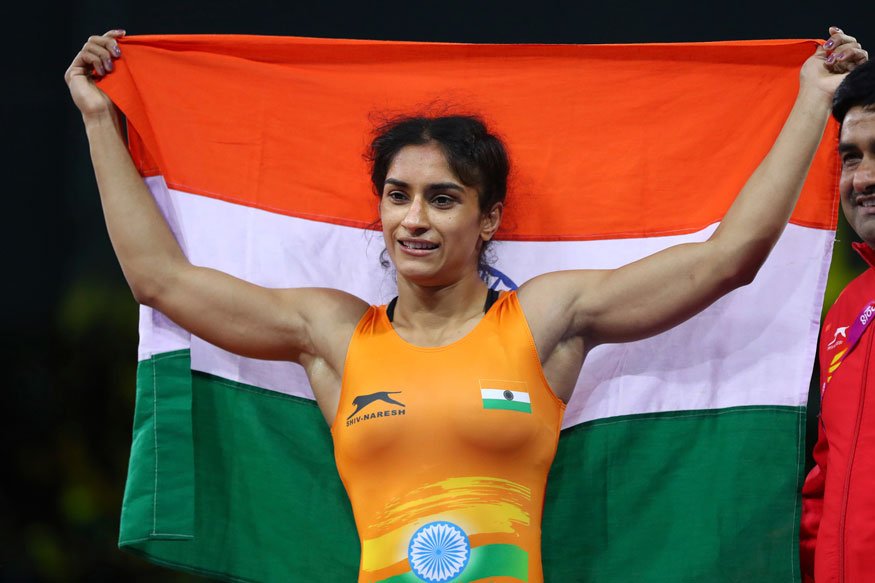 This was India’s second gold after wrestler Bajrang Punia bagged one in men’s 65kg on Sunday. With this, India rose to the seventh spot in the Asian Games medal tally with 2 gold, 2 silver and 1 bronze.

Vinesh completely dominated the contest, taking a 4-0 lead initially before stretching it further to 6-2 to pocket the yellow metal.

Vinesh, who beat Irie in the Asian Championships semi-final earlier this year, started cautiously before pinning the Japanese grappler down to take four quick points.

The Indian displayed some great defence to hold on to her 4-0 lead at the end of the first three minutes.

After the breather, Vinesh’s defence was deemed too passive by the referee and the Indian was forced to concede a point that somehow reduced the deficit to 4-1 with 30 seconds to go.

But the 2014 Incheon Asiad bronze medallist came back well to pocket two more points towards the end that saw her clinch the gold with a 6-2 margin.

Earlier, Vinesh hardly broke a sweat in her semi-final encounter against Daulatbike Yakshimuratova of Uzbekistan, whom she trounced in mere 75 seconds by technical superiority (10-0).

Vinesh had earlier registered a comfortable 11-0 victory over South Korea’s Kim Hyungjoo in the quarter-finals, after defeating China’s Sun Yanan by technical superiority 8-2 in the 1/8 finals. (IANS)

Wear our cricket kit and walk into the field: Virat Kohli loses cool after loss…

Watch: Babar Azam’s father breaks down after Pakistan’s victory over…

“Some people deserve to die”: Youth’s…