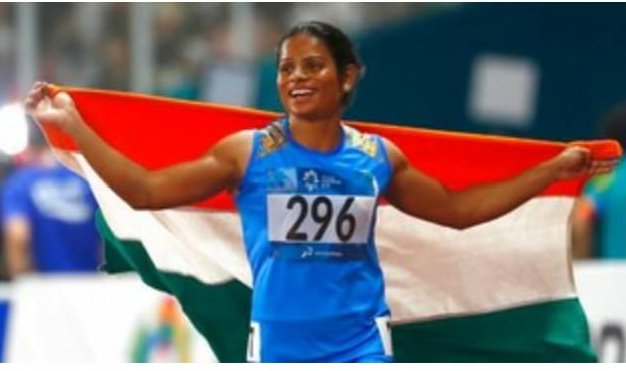 The gold medal went to Edidiong Odiong of Bahrain, who clocked the time of 11.30s while China’s Yongli Wei took the bronze, clocking 11.33s.

Earlier in the day, she stormed into the final after finishing third at semi-finals by clocking 11.43 seconds.

The star sprinter’s national record is 11.29 which she had clocked in the National Games at Guwahati in June.

Congratulate #DuteeChand on sprinting to glory with a Silver in 100m sprint at #AsianGames2018. You have made the nation proud and #Odisha could not have been prouder! Best wishes. #OdishaForIndia

The 22-year-old athlete had breached the Asian Games qualifying time of 11.67 seconds after putting up a stunning show in the Inter-State Athletics Championships in Guwahati on June 29 this year where she broke her own national record clocking 11.29 seconds in the semi-finals before winning the final in 11.32 seconds

Dutee, who had won a ‘gender case’ against the international federation at the Court of Arbitration for Sports, had run 11.56 in the Federation Cup in March and was not picked in the Indian team for the Gold Coast Commonwealth Games in 2014.

Meanwhile, the Odisha Olympic Association (OAA) announced cash prize for Dutee. “Rs 50,000 would be given to Dutee Chand for making her state proud by winning a silver medal in the Asian Games,” said association General Secretary Asirbad Behera, congratulating the 22-year-old athlete for her new glory.