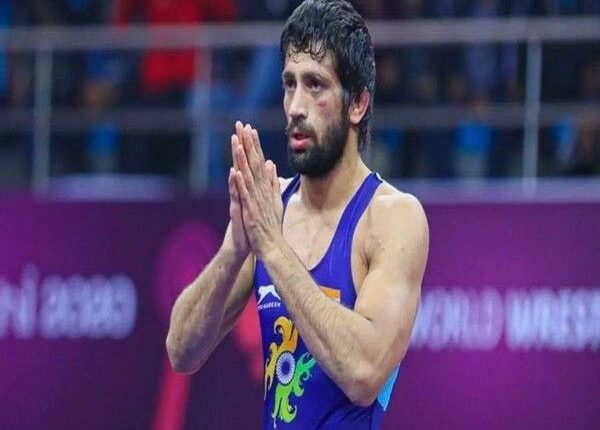 Ravi, who had bagged silver at Tokyo Olympics, won his third straight Asian Championships title with a comprehensive 12-2 technical superiority win against Rakhat Kalzhan of Kazakhstan in the 57kg men’s freestyle final.

He began his title defence with a win over Rikuto Arai of Japan and followed it up with a semi-final victory over Mongolia’s Zanabazar Zanadanbud.

Meanwhile, Tokyo 2020 bronze medallist Bajrang Punia went down to junior world champion Rahman Mousa Amouzadkhalili of Iran 1-3 in the men’s 65kg freestyle final. Rahman had come through the qualification round to defeat the top-seeded Bajrang Punia.

Punia, a two-time Asian champion, hardly broke a sweat in his run-up to the final but struggled with his attacks in the summit clash. He defeated Uzbekistan’s Abbos Rakhmonov and Haji Mohamad Ali of Bahrain to book his place in the final.

Later in the day, Gourav Baliyan also won a silver in the 79kg, losing to Ali Bakhtiar Savadkouhi of Iran in the final. Gourav was down 0-8 in the final but produced a terrific comeback to make it 9-9 right at the end of the bout. But a bigger scoring move (four-pointer) from the Iranian meant the Indian grappler had to settle with the silver medal.

It is Gourav’s second silver medal at the Asian Championships after finishing runner-up in 2020 as well.

Meanwhile, men’s 70kg freestyle wrestler Naveen pinned Temuulen Enkhtuya of Mongolia to add another bronze to India’s tally. The Indian had lost in the quarter-finals but fought for third place through the repechage rules.

Satywart Kadian picked the final medal of the day for India, winning the 97kg men’s freestyle bronze. The heavyweight Indian wrestler defeated Zyyamuhammet Saparov of Turkmenistan by technical superiority to win his fourth bronze medal at the continental competition.

With five more medals on Saturday, India’s medal tally at the Asian Wrestling Championships 2022 has risen to 15 medals — one gold, four silvers and 10 bronze. World silver medallist Deepak Punia will be next in action on Sunday, which is the last day of the meet.

Hockey World Cup: Korea fight back from 2-goal deficit to…