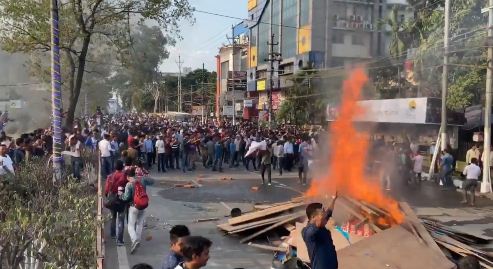 Guwahati: Guwahati, the epicentre of anti-CAB protests, was placed under indefinite curfew while Army was called in at four places and Assam Rifles personnel were deployed in Tripura on Wednesday as the two northeastern states plunged into chaos over the hugely emotive Citizenship (Amendment) Bill, officials said.

14 arrested in Assam for pro-Taliban posts on social media

Army has also been deployed in Tinsukia, Dibrugarh and Jorhat districts, officials sad.

Late in the night, curfew was also imposed in Dibrugarh for an indefinite period as protesters targeted the houses of Assam Chief Minister Sarbananda Sonowal and Union minister Rameswar Teli in the district.

A Defence spokesman had earlier said in a statement in Shillong that two columns of the Army were deployed in Tripura.

In a late evening clarification, it said that troops of the Assam Rifles, a paramilitary force commanded by Army officials, were pressed into service in Tripura.

Internet services have been suspended in 10 districts of Assam, beginning 7 pm on Wednesday, as massive protests raged across cities, to prevent “misuse” of social media to disturb peace and tranquility and maintain law and order.

Internet services are already suspended in the entire state of Tripura for 48 hours from 2 pm on Tuesday to thwart attempts by mischief mongers to disturb peace. An order issued by the Tripura government also prohibits SMSes on the networks of all mobile service providers.

As tens of thousands of anti-CAB protesters descended on the streets of Assam on Wednesday, clashing with police and plunging the state into chaos of a magnitude unseen since the violent six-year movement by students that ended with the signing of the Assam accord, Guwahati was placed under curfew.

Initially, Assam police chief Bhaskar Jyoti Mahanta told PTI that the curfew, which began at 6:15 pm on Wednesday, will continue till 7 am on Thursday. However, he later informed that it has been extended indefinitely.

Defying the curfew order protesters were still on the streets of Guwahati where most arterial roads were blocked.

The Congress party has, meanwhile, called a shutdown in Tripura on Thursday.

Though no party or student body had called a shutdown in Assam, protesters, a majority of them students, fought pitched battles with security forces, including in front of the secretariat, the seat of the BJP government.

Assam smouldered with protests rocking several parts of the state on the day the Citizenship (Amendment) Bill was hotly debated and passed in the Rajya Sabha after its passage by the Lok Sabha on Monday.

A railway station in Dibrugarh’s Chabua, the hometown of the chief minister, was set on fire by protestors late in the night. The Panitola railway station in Tinsukia district was also torched, a Northeast Frontier Railway spokesperson said.

Some student leaders, who went live on national TV, claimed many agitators were injured in police action in front of the secretariat.

According to unofficial accounts, hundreds of protesters have been detained in Guwahati and other places like Dibrugarh and Jorhat.

Police opened fire in Assam capital Dispur to quell a protest by the agitators after water cannons, baton-charge and tear gas failed to rein them in. Police also fired at Ulubari, which is barely 500 m from the state police headquarters.

A large number of agitated students blocked the road near the secretariat complex and pulled down the barricade erected on the arterial G S Road, provoking police action.

Police burst teargas shells and baton-charged the protesters, who were seen lobbing back the shells at men in uniform.

They also damaged a stage erected on the road for Prime Minister Narendra Modi’s proposed summit meeting with his Japanese counterpart Shinzo Abe on Sunday.

The agitators pulled down hoardings and banners advertising the government’s welfare schemes and made a bonfire of those before the secretariat, damaged the police commissioner and joint police commissioners vehicles, set on fire buses and other vehicles in scenes reminiscent of the 6-year movement by students against illegal settlers that ended with the signing of the Assam accord in 1985.

In a rare show of solidarity with the protesters, government employees at the secretariat wore gamosa, the states symbol of honour, and stood behind the gates and chanted slogans against the CAB.

The Assam Secretariat Employees Association also issued a statement supporting the protests and opposing the CAB.

Chief Minister Sarbananda Sonowal was reported to have been stranded for some time at the Guwahati airport on his return from Tezpur because of the agitation.

Krishak Mukti Sangram Samiti (KMSS) of Akhil Gogoi has called a hartal to protest against the controversial bill until it is withdrawn.

Life virtually came to a grinding halt in Lakhimpur, Dibrugarh, Tinsukia, Jorhat, Sivasagar, parts of Guwahati and in some districts of Lower Assam.

Guwahati and Dibrugarh Universities have postponed all examinations scheduled till December 14.

Classes in most universities and colleges were not held as students joined the protests. Schools were open but there were hardly any children as buses they were travelling on were stranded.

Anti-CAB agitators also clashed with police in Dibrugarh where rubber bullets and tear gas shells were fired to break up protests. A journalist was reported injured in an stone throwing incident in Dibrugarh.

In view of the protests, the Northeast Frontier Railway has cancelled many trains and rescheduled some that originate from the state.