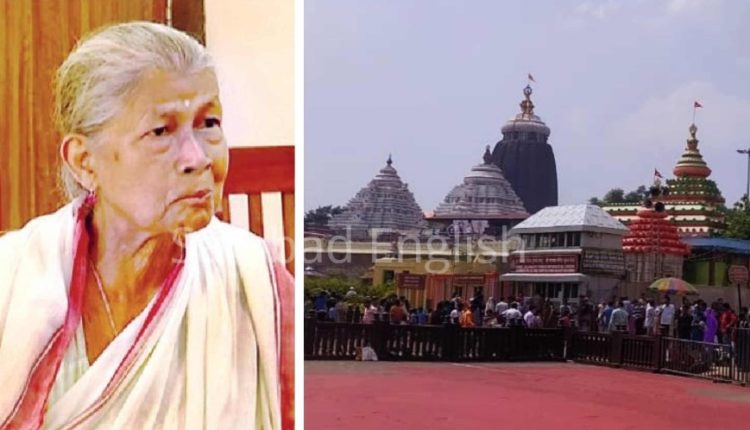 Puri: Adding another name to list of donors at the Jagannath Temple in Puri, a woman from Assam has expressed her wish to donate all her properties to Lord Jagannath.

Strongly influenced by Charisma of Lord Jagannath during her stay in Puri, Rameswari Devi, an elderly woman from Sunitpur village in Tezpur district of Assam, decided to donate her land and three houses as part of her devotion towards God.

In this regard, she urged Shree Jagannath Temple Administration (SJTA) in Puri for processing to make registration of the properties belonging to her late husband in name of Lord Jagannath.

According to reports, Rameswari is a retired Forest official of Assam. She has two sons and two daughters, who are now well-settled in their lives. Following retirement and wedding of her children, the 62-year-old woman has been residing near Srimandir in Puri since February 2011 to spend rest of life in devotion towards Lord Jagannath.

Earlier, she had approached one of servitors from Assam at Srimandir to donate her properties. However, she had failed to make her wish true. Later, she decided to attempt one more time through proper channel.

On Friday, Rameswari visited the SJTA office and discussed with the officials about transferring all her properties to Lord Jagannath. She urged the temple administrator to send a team of officials to Assam and proceed for transfer process after conducting necessary verification of the land and buildings.

Speaking about the matter, SJTA Administrator (Rituals) Jitendra Kumar Sahoo said that the process to transfer the woman’s properties as donation will be done after reviewing the land documents. Further decision can be taken after proper assessment.

Sources said that Rameswari had been staying at Assam Bhawan in front of Paschim Dwara of Srimandir. After demolition of the structure in Srimandir beautification drive, now she is residing at Bagedia Dharmasala.

Process for shifting of Badambadi bus stand in Cuttack begins

Puri Srimandir servitor killed out of vendetta; 6 including…