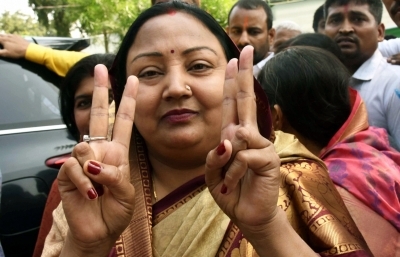 Expecting the win, a large number of male and female supporters assembled at the official residence of Anant Singh in Patna.

Her son Abhishek Singh said: “There was no contest in Mokama. We knew that the battle of Mokama would be won convincingly on the day of nomination. Now the election result proved it. We have done special preparation to celebrate the day of victory. We are offering Rasgulla and Laddu to every person assembled in our house.”

As per the Election Commission website, Neelam Devi got 77,077 votes while BJP candidate Sonam Devi had 60466 votes after 20th round. Another one round of counting may have 4000 votes.

Following the victory, former cabinet minister Kartikeya Singh said: “There is only Anant Singh in Mokama. No other leader here. Chirag Paswan came there but the result was not affected. BJP brought 40 top leaders in Mokama but all failed. Only Narendra Modi and Amit Shah did not come to Mokama for the election campaign.”

Bypoll in the Mokama Assembly seat was necessitated after sitting RJD MLA Anant Singh was convicted in a criminal case.