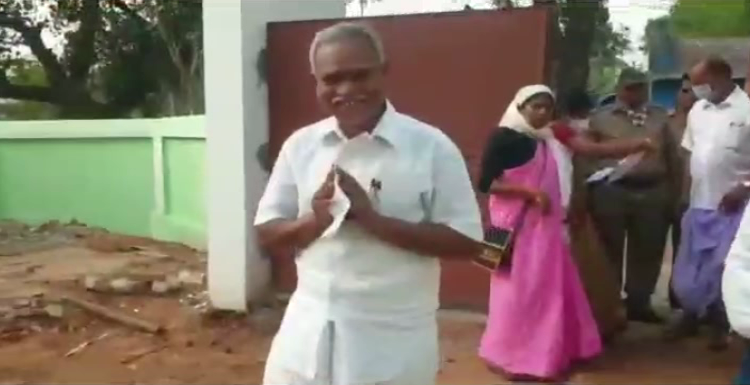 Phulbani: Fifty seven-year-old ruling BJD MLA Angada Kanhar from Phulbani Constituency believes that age is no bar for education as the legislator sat for the offline Matric Examination that began in the state today.

Like other students, the lawmaker turned up at Rujangi High School, which is affiliated to Odisha State Open University (OSOU), holding his admit card to appear for the exam.

Kanhar was elected as Phulbani MLA on BJD ticket for the first time in 2019 Assembly elections. Prior to this, he was elected as Zilla Parishad member in Phiringia block of the district.

“I had not been able to give the test in 1978 due to some family issues. Later, I entered into Panchayat politics in 1984 and now serving people as an MLA. Today, I feel very happy as I finally appeared the exam,” the legislator said.

“There is no age to acquire education or learn ew things. Education is necessary not only to get a job in future, but also to gain knowledge,” said the jubilant MLA, adding that he gave the exam just like any other student without any special arrangements made for him.

After a gap of two years, the annual examination, conducted by Board of Secondary Education (BSE), is being held in the state on offline mode. The exam that began today will continue till May 10.

As per the schedule, High Certificate Examination (HSC), State Open School Certificate (SOSC) and Madhyama (Sanskrit) exams was held from 8 am to 10 am amid tight security.

Over  5.85 lakh students appeared in the exam at 3,540 centres across the state. More than 35,000 teachers have been engaged to supervise the examination.

Respite from heatwave in Odisha! Low pressure likely next week