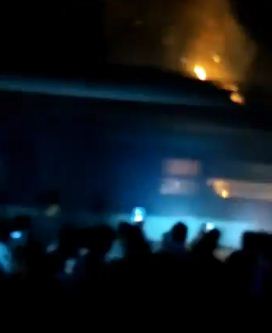 Amritsar: In a terrible disaster, at least 30 people watching the burning of Ravan effigy were mowed down by speeding train here in Punjab on Friday, police said.

A large number of people were watching the Ravan effigy in flames while standing along the railway tracks near Dhobi Ghat when the train crushed them.

They reportedly could not hear the hooting of the train due to the exploding crackers.

A witness told a news channel that as the Ravan effigy went up in flames, people started running when they were crushed by the train on the way to Amritsar from Pathankot.

Witnesses said the dead included children. There were reportedly around 700 people at the accident spot.

Area legislator and Local Bodies Minister Navjot Sidhu told a news channel on telephone from Bengaluru that the death toll was alarmingly high.

His wife Navjot Kaur Singh was the Chief Guest at the Dussehra where the incident occurred at around 7 p.m.