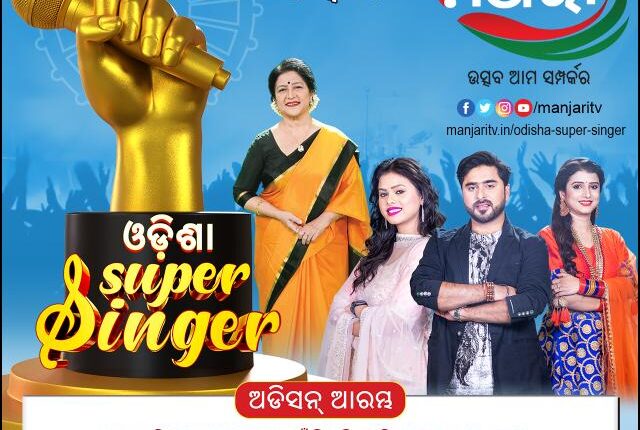 Bhubaneswar: Singers in Berhampur will get an opportunity to showcase their singing talent as Manjari TV, Odisha’s first free-to-air Odia entertainment channel, will organize audition for its contemporary singing reality show ‘Odisha Super Singer’ tomorrow in the town of Ganjam district.

As per the schedule released by Manjari TV, the audition will be organized at Town Hall in Berhampur from 10 am to 5 pm tomorrow. Participants should be in the age group of 15 to 40 years.

The final audition for the singing reality show will be at Manjari Studio in Bhubaneswar on December 21.

The eyeball-grabbing promotional video of this mega reality show features Ollywood singers Diptirekha, Abhijeet and Antara with the legendary singer Trupti Das, as the Mahaguru. The contestants will have the opportunity to perform in multiple rounds to bag the coveted title of Odisha Super Singer.

The winner will be rewarded with cash prize along with host of other gratifications including assured musical contracts in playback singing in movies produced by Manjari and music videos of Manjari TV, Manjari Music, Radio Choklate, and our associate partners like Amara Muzic and OdiaOne.

Alia talks about fitting into Kapoor family in ‘Koffee…