The Governor was addressing students at a State-level essay competition organised by the Sambad Group on the occasion of Azadi ka Amrit Mahotsav on Sunday. 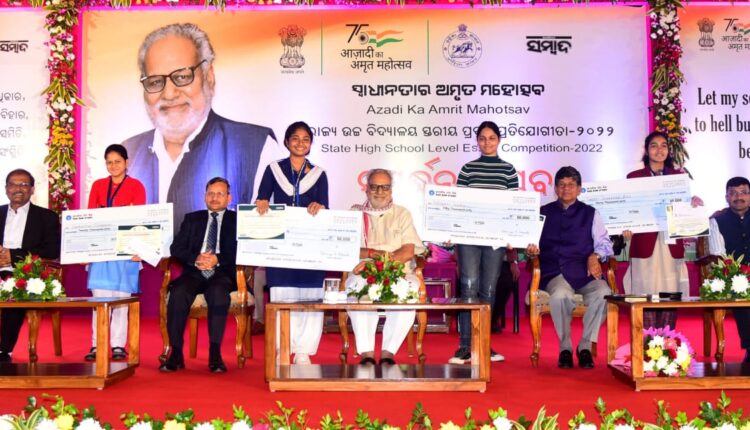 Bhubaneswar: “Let children be harbingers of progress,” said Odisha Governor Professor Ganeshi Lal while felicitating students at a State-level essay competition organised by the Sambad Group on the occasion of Azadi ka Amrit Mahotsav on Sunday. Addressing the event as chief guest on the premises of Raj Bhawan, the Governor said the participation of around 70,000 students across the State and indirect involvement of nearly 4.5 crore people was proof that the event was a ‘Mahotsav’ in true sense.

“When each and every member of the society participates, that is called a Mahotsav. The true essence of the occasion lies in driving the world from darkness towards light, towards Lord Jagannath. The sprit of Azadi ka Mahotsav should be celebrated in a manner that the whole world wins against divisive forces. The conduct of an essay competition on a single day across the State seemed a mammoth task when the proposal was mooted. But the Sambad Group managed to do the infeasible by bringing together so many students for the  here for the  event and felicitation,” the Governor said while lauding the efforts of Sambad Group chief Soumya Ranjan Patnaik.

Chief Secretary Suresh Chandra Mahapatra, who also attended the event as one of the guests, said the first requisite for successful people is to have a dream for the future. “Today, children who have dreams for the State  have assembled here to express their vision through their essays,” he said. “No other State could have managed to bring together students from across every corner for an event like this for the Azadi ka Amrit Mahotsav. I thank the Sambad Group for fulfilling our Governor’s desire by organising the programme. This will help students derive inspiration from the freedom struggle and the progress Odisha has made over the years to become a sports hub and clinch the top position in disaster management after the super cyclone in 1999.,” Mahapatra added.

Chairman of Sambad Group Soumya Ranjan Patnaik said the event opened the doorway to expression of rare talents. “I see a Droupadi Murmu in almost two-thirds of the participating students who wrote essays on “Mo Swapna Ra Odisha” and “Biswa Guru Bharat. Odisha may be a poor State but with Lord Jagannath’s blessings, we possess all the talent and skills to help India become a world power. We must strive towards that goal,” he said.

During the felicitation, Saswati Nayak, Srusti Smaranika Bisi and Sanchi Agarwal (English ) and Kumari Saipriya Giri, Swapnajit Nayak and Swagatika Choudhury (Odia) emerged as winners. Cash award of Rs 50,000, Rs 30,000 and Rs 20,000 were given to the first, second and third rank holders respectively.