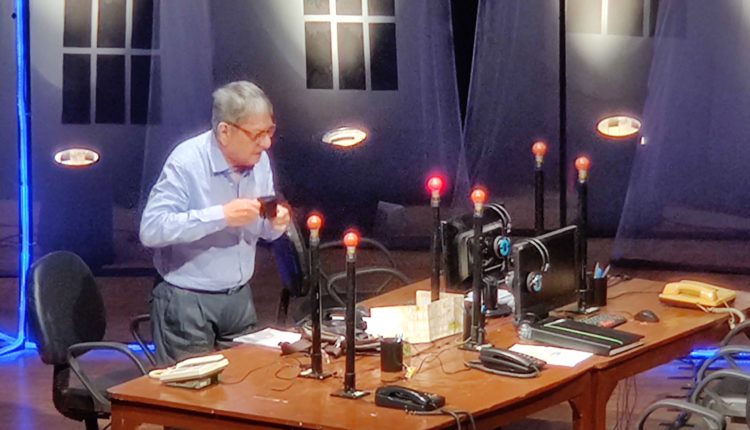 Bhubaneswar:  Veteran Bollywood actor Amol Palekar left the packed house spellbound with his performance at Rabindra Mandap here last evening. Palekar was back to the theatre after a gap of 25 years.

Adapted from the Danish crime thriller Den Skyldige, the Hindi play ‘Kasur’ was well received by hundreds of eager fans. Palekar’s riveting performance capped a day filled with engaging sessions on a gamut of subjects.

The play was a part of the three-day Tata Steel Bhubaneswar Literary Meet ending today.

“I am performing on stage after 25 years. I had to unlearn what I had learnt from my Gurus. I learnt the nuances once again and underwent the process.. Like singers and sportspersons practise daily, we actors don’t rehearse once we get recognition. After so many years, I had to peel off the rust and now I am in front of you,” the noted actor expressed.

On the second day of the prestigious event at XIMB, acclaimed author P Murugan spoke about his new book Amma, a collection of essays chronicling the life of his mother. The tenderly written essays, now translated into English, capture poignant moments in the life of a strong and independent woman. Murugan’s session, attended by scores of young literary enthusiasts, brought to life his deep admiration for language and how it has helped in this memoir.

Legendary flautist Pandit Hariprasad Chaurasia enthralled the audience during a discussion on his memoir Breath of Gold. Together with his biographer, Sathya Saran, Pandit Chaurasia shared intimate anecdotes from his formative years, giving a rare glimpse to his rich life.

Spoken word performer Priya Malik joined British author-poet Rosie Garland on stage to discuss the role of the writer as a performer. Their discussion was punctuated by well-received readings and recitations. The day also had a fair share of the silver screen with the Odisha launch of Satyarth Nayak’s book, Sridevi: The Eternal Screen Goddess. This was followed by Nandita Das’ session on her film Manto. The acclaimed actor spoke about her personal and cinematic journey with the inimitable author and playwright.

Delegates who will be part of the concluding day of this year’s TSBLM include Bachi Karkaria, Anand Neelakantan, Gayatribala Panda, Kunal Basu, Gourahari Das and Biswa Kalyan Rath.

Motorcyclist dies after being hit by tractor in Odisha’s Sonepur

Air pollution in India caused over 1.16L infant deaths in…