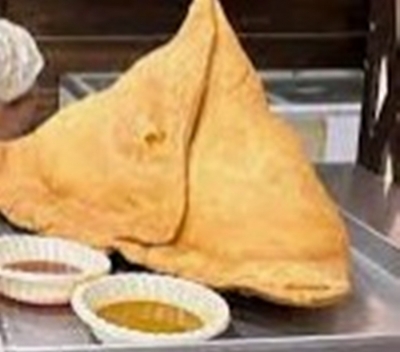 Meerut: Samosa is a perennial favourite, but now food bloggers are getting increasingly excited over the new challenge that this snack is offering them in Meerut.

A sweet shop in Kurti Bazaar Meerut has prepared a samosa that weighs eight kilograms and the challenge is to eat it within 30 minutes. The winner will get a cash prize of Rs 51,000.

The shop owner Shubham told reporters, “I had been wanting to do something different to bring the samosa into the news. We decided to make a ‘Bahubali’ samosa. We began by making a four kg samosa and then the eight kilogram samosa.”

He said that the eight kg samosa costs around Rs 1,100 and the filling in it includes potato, peas, cottage cheese and dry fruits.

“Till now no one has been successful in the eating challenge. Many people have tried but could not go anywhere near completing the challenge and we plan to make a 10 kg samosa now,” Shubham said.

However, he admitted that the Bahubali samosa had brought back customers to his shop which is becoming increasingly popular.

“Food bloggers from different parts of the country are coming to see the Bahubali samosa and are making reels,” he said.

After 2 ‘pheras’ bride calls off wedding saying groom too ‘dark’