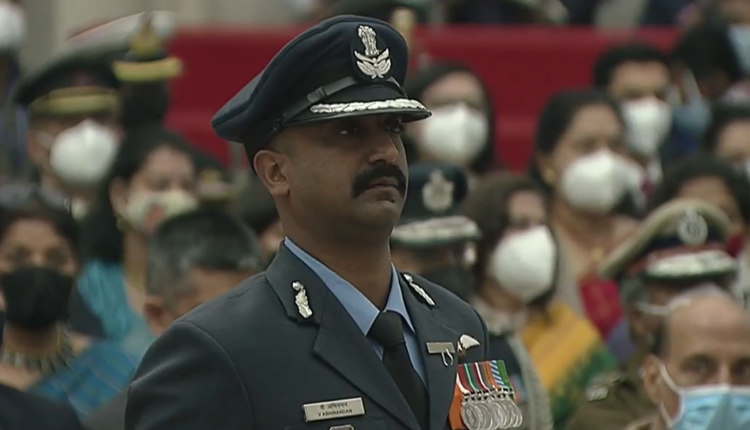 Varthaman was promoted from Wing Commander to the rank of Group Captain earlier this month.

Omicron: Only vaccinated persons to be allowed inside malls, cinema halls in Karnataka

He was honoured with Vir Chakra, India’s third-highest war time gallantry medal, by the President in an investiture ceremony.

Varthaman was captured by the Pakistani Army on February 27, 2019 after his MiG-21 Bison jet was shot down in a dogfight with the Pakistani jets. Before his jet was hit, he downed a Pakistani F-16 fighter.

The Balakot airstrike was carried out against the terror camps at Balakot of Pakistan’s Khyber Pakhtunkhwa province in response to the deadly Pulwama attack that claimed the lives of 40 Central Reserve Police Force (CRPF) personnel.

It was the first aerial assault carried out by India in Pakistan after the 1971 India-Pakistan war.

Codenamed as ‘Operation Bandar’, the airstrike was conducted by the seventh and ninth squadrons of the Indian Air Force.

After the strike, over two dozen fighter planes, including F-16s left Pakistani bases aiming to hit the Indian military installations. But the Indian Air force in anticipation of such an attack was ready and aerial dogfight ensued. It ended with Wing Commander Varthaman, shooting down an F-16 fighter plane of Pakistan and getting hit in the process.

Varthaman exited safely but was captured. Pakistan’s Prime Minister Imran Khan had announced the capture and India demanded his unconditional and safe return.

Back then, the US played a role in the release of the officer, who safely returned to India.

Omicron threat: INSACOG recommends booster dose for people above the age of 40