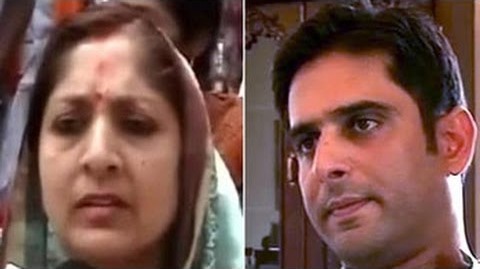 Bhubaneswar: Balangir Lok Sabha constituency in western Odisha, which is going to polls tomorrow morning, is witnessing family politics. Especially, the people of the region are watching the fight between Kalikesh Narayan Singhdeo and Sangeeta Kumari Singhdeo from Balangir royal family, who happen to be brother-in-law and sister-in law, with curiosity. They are BJD and BJP nominees respectively.

On the other hand, veteran Congress leader and former law minister Narasingha Mishra, who is known as a political rival of Balangir royal dynasty, is locked in contest against Arka Keshari Singhdeo from the  royal dynasty in Balangir assembly constituency. His son Samarendra Mishra has also descended to the election arena to fight against the two royal scions in Balangir Lok Sabha constituency.

Kanak Vardhan Singhdeo, another scion of Balangir royal dynasty, is fighting election from his old fortress Patnagarh assembly constituency. Kanak Vardhan was the BJP Legislature Party leader in the dissolved assembly and he happens to be the husband of Sangeeta Kumari Singhdeo.

Balangir royal dynasty has been enjoying political clout ever since the independence. Maharaja Rajendra Narayan Singhdeo, the ruler of the ex-princely state, had founded Ganatantra Parishad and had been elected to Lok Sabha in 1951-52 elections from double constituency of Kalahandi-Balangir. He then switched over to state politics and became the chief minister of Odisha in 1967, heading the Swatantra-Jana Congress coalition government.

Rajendra’s eldest son Rajraj was elected to Lok Sabha in 1967 and 1971. Again he had unsuccessfully fought 1989 Lok Sabha election as BJP candidate.

Rajaraj’s younger brother Ananga Uday also contested 1977 Lok Sabha election as a Congress candidate, but lost to Janata Party. Later, he switched over to Janata Party and fought the 1984, 1991 and 1996 elections unsuccessfully. Rajraj’s son and Ananga’s cousin brother Kanak Vardhan and his wife Sangeeta Kumari were his BJP rivals.

With the birth of Biju Janata Dal, a regional party and formation of an electoral alliance with Bharatiya Janata Party, the feud between the two families under the same royal dynasty came to an end, though for a few years. As part of seat sharing, BJD left the Balangir Lok Sabha seat to BJP’s Sangeeta Kumari Singhdeo, who won the 1998, 1999 and 2004 elections consecutively. But after the breaking of BJD-BJP alliance on the eve of 2009 general elections, Balangir witnessed the resumption of political feud between the two families.

Kalikesh Narayan Singhdeo fought from BJD against Sangeeta Kumari of BJP and trounced her twice consecutively in 2009 and 2014. The brother-in-law and sister-in-law duo are locked in the contest again this time.

A veteran leader of the district and former minister Jogendra Behera, had met BJD supremo Naveen Patnaik and requested him to choose his son as the party candidate this time in his place. But Naveen turned down his request and fielded a new face (Pradeep Behera).