Bandh in Odisha’s Nilagiri over chaining of Journalist Lokanath Dalei 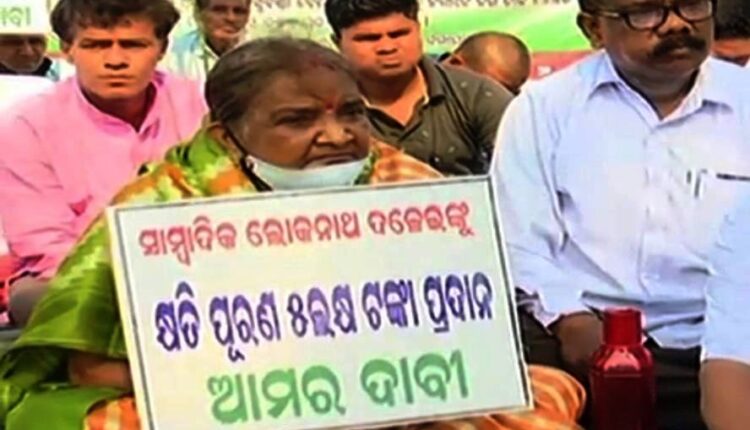 Balasore: A 12-hour bandh is being observed by the Kriyanusthan Committee in Nilagiri of Odisha’s Balasore district today over the chaining of journalist Lokanath Dalei to a bed in a hospital by police.

The agitators demanded withdrawal of a ‘false’ case against the journalist, suspension and arrest of former Nilagiri police station IIC Draupadi Das and SI Subarna Behera and registration of criminal case against the two, and a compensation of Rs 5 lakh for Dalei.

Holding placards and banners, members of the committee staged road blockade on the National Highway here. Hundreds of vehicles remained stranded on the both sides of the road.

Educational institutions and emergency services have been excluded from the ambit of the bandh.

The protesters have warned of intensifying the agitation in the case of non-fulfilment of their demands.

Worth mentioning, Draupadi Das and Subarna Behera have been transferred to the Police District Headquarters till the completion of the probe. A Havildar was also suspended in this connection.

On April 7, Nilagiri police had allegedly chained Dalei, reporter of Odia newspaper daily Sambad and its television channel Kanak News, to a bed while he was undergoing treatment at the Balasore District Headquarters Hospital. Moreover, Das had allegedly thrashed the journalist, following which he fell unconscious.

While the action of Nilagiri police has raised serious questions, Dalei alleged that Das did it intentionally as she had grudge on him after he reported the involvement of the Nilagiri police in corruption.

According to reports, an argument took place between the journalist and Niranjan Rana, a homeguard of the police station, on April 4 at Nilagiri as the vehicles of the two collided in market area. However, the matter was pacified after the intervention of a local.

On April 6, Dalei was informed that the homeguard has lodged a police complaint against him. The reporter was also asked to appear at the Nilagiri police station.

As he reached the police station, Behera snatched his mobile phone under the instruction of Das. As Das assaulted Dalei, he lost his consciousness.

The journalist was then taken to the Nilagiri Hospital and later shifted to the Balasore District Headquarters Hospital for treatment.

His ordeal was far from getting over at the healthcare facility as policemen attached a handcuff around his leg and chained him to a bed of the hospital.

“I had earlier exposed various activities of corruption and irregularities of the Nilagiri police, for which the IIC had a grudge on me. As many as 11 homeguards of the police station have got appointment by furnishing forged certificates as they had exceeded the upper age limit for the job. Besides, the IIC has been receiving bribe from drug peddlers of Nilagiri. I had reported the two incidents to bring the matter to fore,” Dalei had said.