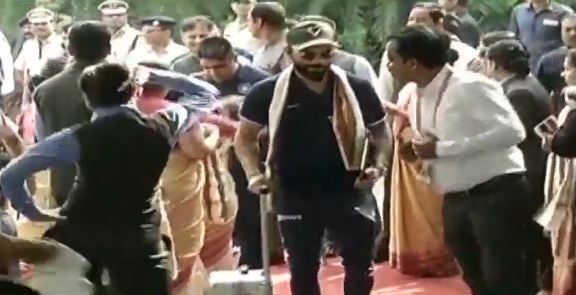 Bhubaneswar: Players of India and West Indies cricket teams reached Odisha capital today ahead of the ODI match scheduled to be played at the Barabati Stadium in Cuttack on  December 22.

The two teams and support staff arrived at the Biju Patnaik International Airport here around 1 pm and received a rousing welcome. They were taken to Mayfair Hotel in the city in special buses amid tight police security.

Hundreds of fans were seen cheering for the players on the roadside as the buses headed towards the hotel. Players of the two teams were welcomed at the hotel in a traditional way.

A total of 21 platoons of police force have been deployed for the safety of players, Commissionerate Police sources said.

The match will be a decider as India beat West Indies by 107 runs in the second ODI that was played at the VDCA stadium in Visakhapatnam yesterday and levelled the three-match series 1-1.