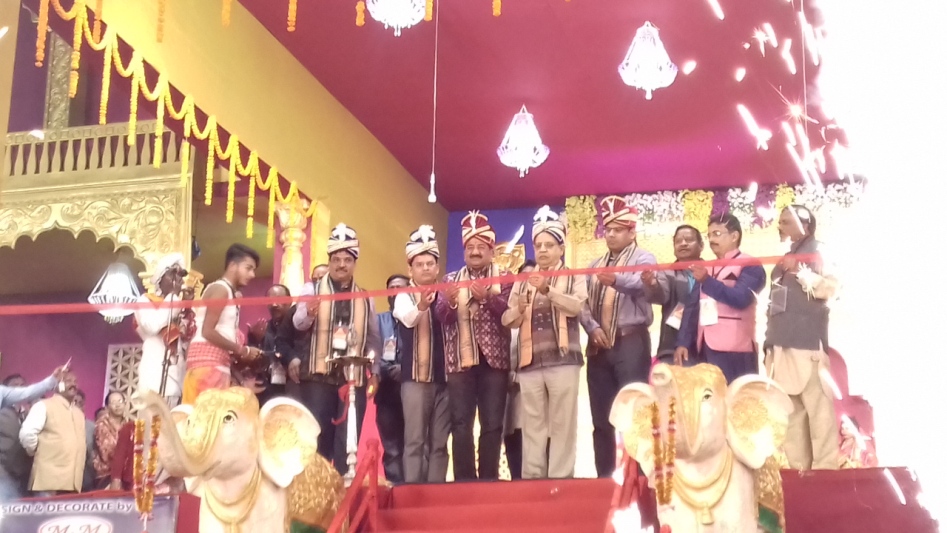 Dhanu Jatra, the biggest festival of Bargarh has attained a global recognition. It is the world’s largest open-air theatre, spread across a 6 km radius area around Bargarh town and Ambapali village. Not only the actors but the public too take part in this annual drama. This festival continues for 11 days.

During Dhanu Jatra, entire Bargarh town, Ambapali village and river Jeera turn into Mathura, Gopapura and river Yamuna respectively. Surprisingly, the geographical area of Bargarh town and Ambapali village is similar to that of Mathura and Brindavan. The festival is based on the mythological story of Lord Krishna and his demon uncle Kansa. The drama begins with the marriage of Debaki and Basudeba. Angry over the marriage of his sister, prince Kansa dethrones his father, Ugrasena and thus becomes the new king of Mathura Nagari.

During this festival, King Kansa becomes the supreme ruler of Bargarh town. He rides on an elephant and moves around the town every evening, which is known as ‘Nagar Parikrama’. He monitors the work of different departments and orders the concerned officials to perform their duties properly. As a part of this festival, the people of Bargarh obey his commands. The king can punish people for their mistakes. He also imposes fines on offenders. He invites ministers, legislators and administrative officers to his Durbar and assigns them important tasks. For the entertainment of the king, dance troupes come to perform from different parts of the world.

On the other side of river Jeera, the people of Ambapali village witness the important episodes of Lord Krishna’s childhood. People paint their houses beautifully before the beginning of the festival. They worship Lord Krishna and brother Balaram.

The preparations for Bargarh Dhanu Jatra begin with the erection of ‘Holy Pillar’ (Subha Stambha). It is the initial stage of the festival. Amid puja rituals, the ‘Holy Pillar’ is erected at the Sanchar Field, few days before the actual festival begins.

On the first day of the festival, a carnival is organized. In this cultural procession, officers of District Administration and cultural troupes from different parts of Odisha take part. Then puja is performed at Maa Samleswari Temple of Bargarh. After puja, the festival is officially inaugurated. Every evening spectators enjoy cultural programmes in Kansa Durbar and Rang Mahal. Dancers from across India mesmerize the audience with their performances. During DhanuJatra, various ministers of Odisha, administrative officers, sports players and artistes visited the Durbar of King Kansa. The actors of the drama enthralled the audience.

In Ambapali village, the place which transforms into Gopapura during this festival, devotees witness Krishna Leela. People also enjoy special programmes in Nanda Durbar. People from all over the world visit Bargarh to witness this grand festival. Fairs and exhibitions are organized in the town during this occasion. Every evening people can be seen thronging Mina Bazar, Trade Fair, Mega All India Craft Bazar, Pallishree Mela and National Handloom Expo for shopping. Stalls selling food items also attract the people. People enjoy rides on Giant Wheels, Breakdance and Toy Train.

The celebration of Bargarh Dhanu Jatra is associated with India’s Independence. The festival started in 1948 to celebrate the freedom of India. The annual drama ends with the killing of King Kansa by Lord Krishna on Pousa Purnima. This year, the Bargarh Dhanu Jatra will complete its 70th edition. The famous cultural event began on January 11 and conclude on January 21.

On the last day of the festival, lakhs of people gather in the town to witness the killing of King Kansa at the hands of Lord Krishna. This annual drama celebrates the victory of good over evil. It is attached with the emotions of the people of Bargarh Town.

Krittika Satpathy is a Post Graduation student in English Literature.