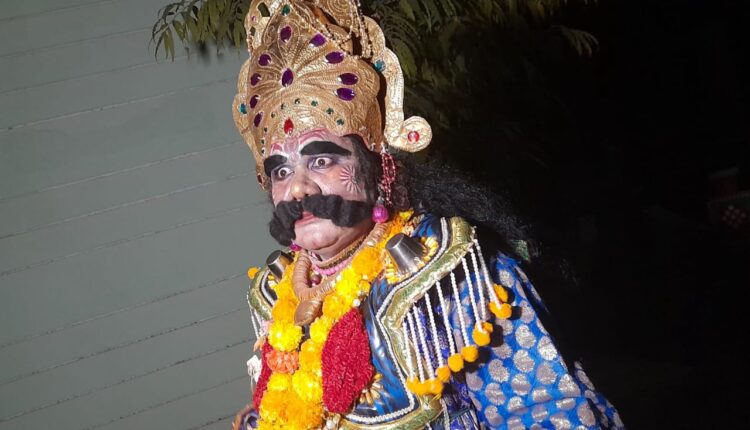 Bargarh: Putting all speculations into rest, Hrusikesh Bhoi has been nominated for the role of the most important character ‘Kansa’ in famous Bargarh Dhanu Jatra.

The selection committee of Bargarh Dhanu Jatra picked up Hrusikesh for the pivotal role from dozens of artists, who were in fray.

Sources said that total 56 artistes had applied for the role of Kansa, of them 42 were selected for the final round of the audition. Leaving all participants behind, finally Hrusikesh emerged as the best choice for the role in Dhanu Jatra.

With the selection, Hrusikesh will be playing the role of Kansa for 10th time in 75th Bargarh Dhanu Jatra.

Hailing from Chicholi village under Ambabhona Block in Bargarh district, Hrusikesh Bhoi is currently working as the driver in health department. He had played the role of Kansa between 2009 and 2017.

Besides, the selection panel of Bargarh Dhanu Jatra announced the names for following roles in the play.

Here’s the list of artists selected for different characters:

The famous Bargarh Dhanu Jatra will be held from December 27 after a gap of two years due to Covid-19 pandemic. The 11-day event will conclude on January 6, 2023.

Started during 1947-48 at the time of Independence, Dhanu Jatra in Bargarh district is considered as the largest open-air theatre in the world. During the event, entire Bargarh town turns into a stage for the 11-day long theatre. The town is transformed into Mathura under the rule of demon king Kansa. The ‘Balya Leela’ of Lord Krishna takes places at Ambapali on the other side of the Jeera River in the town that turns into Gopapura.

Odisha: No new face for ‘Kansa’ role during Bargarh Dhanu…