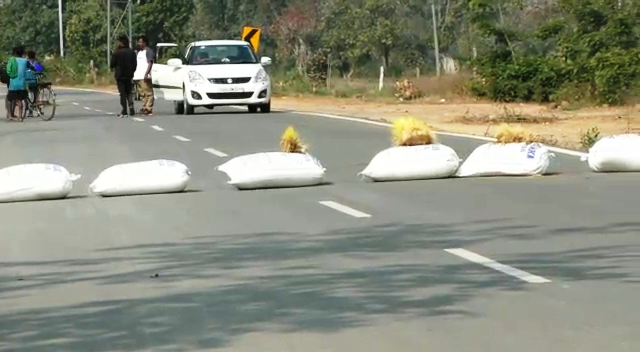 Bargarh: Alleging irregularities in paddy procurement due to the recently-introduced token system, several farmers in Bargarh, known as the rice bowl of Odisha, took to streets on Padmapur-Nuapada State Highway near Baratunda village in the district today.

Sources said members of Jamseth Cooperative Society staged a road blockade by placing paddy sacks on the road at Baratunda Chhak. They alleged  that produces of as many as 153 farmers of the cooperative society have not been procured due to token issue. “There are 23 farmers, who in spite of having their tokens failed to sell their paddy in the market,”  said a member of the cooperative society.

While the state Government claims to have initiated steps for paddy procurement in Rabi season, the agitating farmers have complained that they have not been able to sell their Kharif crops yet. A farmer from the protest spot said, “Our paddies have not been sold yet and the unseasonal rain is damaging the stocks too. But the Government has not offered us any sort of assistance yet. That is why we resorted to the protest.”

Meanwhile, police personnel were deployed at the protest spot to avoid any unpleasant situation.