Bay of Bengal to host another cyclone in May after ‘Asani’?

Bhubaneswar: While Cyclone ‘Asani’ has dissipated, development of tropical systems over the Bay of Bengal during the pre-monsoon season is seemingly far from getting over as the North Indian Ocean may host a fresh depression, this month.

As per the ‘North Indian Ocean Extended Range Outlook for Cyclogenesis’ issued by the India Meteorological Department (IMD), ECMWF deterministic and ECMWF probabilistic models are indicating likely formation of a depression over the eastcentral Bay of Bengal during first half of week 1 (May 13 to May 19) with gradual east-northeastwards movement.

However, IMD GFS, NCEP GFS, GEFS, NCUM and NEPS models are not indicating any development during the forecast period, the outlook said.

The IMD was yet to make any prediction regarding the possibility of further intensification of the forecasted system. 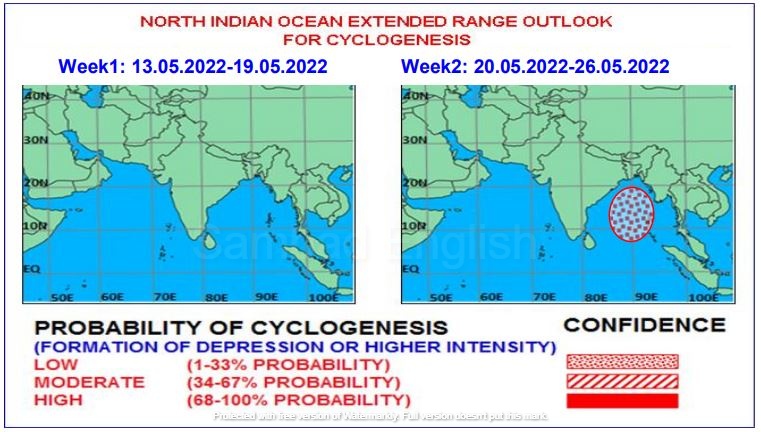 Watching for tropical development in the South China Sea &/or NE Bay of Bengal later next week as strengthening MJO moves into phases 5 & 6 coupled with an equatorial Rossby wave pushes west. pic.twitter.com/NoUiS8KBdn