Burp away the heat with Torani the Odia way ! 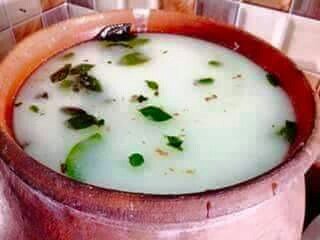 Torani plays a vital role during the unbearable summer months in the Odia food world. After a hearty pakhala meal on a hot summer afternoon, the cherry on the cake is drinking the torani (water of the pakhala) which is a must have. The simplest form of torani is usually taken with salt but it can be flavoured with curd to make it tastier and is a healthy coolant for the body in the killing heat and humidity of Odisha summers.

There are some interesting dishes that are made from torani and can be traced back to ancient days.

Kanjee : Vegetable chunks like pumpkin, radish, brinjal, okra are boiled in basi (stale) torani and tempered with mustard seeds, dry red chili and asafeotida. This wholesome meal is eaten with relish by the rich and the poor all over the state of Odisha during the summer months.

Khuda Peeta(bitter): Khuda is broken rice which is boiled in torani to which a few neem leaves are added. Tempered with salt this gruel is very good for health and is devoured mostly by the people living in rural areas of Odisha.

Khuda Ambila and Khuda Kanjee: It is the same as Khuda peeta ,but in this kanjee neem leaves are not added. This watery, soupy and semi –liquid broth is very good for the stomach. It may be the poor man’s meal but is relished by everyone.

Torani with tavaa (kaffir lime) leaves: The torani is flavoured with crushed tavaa or Kaffir lime leaf, which gives a fresh taste and is taken as a cooling drink.

Torani Challah: Travelling by train from Bhubaneswar to Berhampur one comes across a common sight.Women  selling torani challah. This is a mixture of torani and buttermilk flavoured with curry leaves, ginger and green chilies. A life saving drink it helps to avoid dehydration during the summer heat.

Basanta Firfera: At the onset of summer, young and tender mangoes are cut into small pieces and added to the torani which enhances the flavor and adds a tangy taste to the torani. This torani is known as Basanta Firfera because it is available only during the spring or the Basanta season.

Surjyamukhi Kanjee: Rice from the Mahaprasad also known as anna is used to make this amazing kanjee. This dish is traced back to ancient days when there was no gas or heater to cook a meal. Torani was made by adding water to a handful of anna the previous night , to which thinly sliced radish,pumpkin, brinjal ,green chilies, mango flavoured ginger were added . A thin white muslin or dhoti cloth was tied on the brim covering the mouth of the earthen pot, which was then put outside in the hot sun every day. The torani  slowly fermented and the vegetables got cooked in the solar rays. As the food got cooked in the heat of the  sun rays  it got the name surjyamukhi kanjee.

Tanka Torani: The all time favourite of all Jaganath devotees , this is made out of the left over anna (rice) from the Mahaprasad and is tempered with crushed lemon leaves, coriander leaves ,and tempered with ginger .

Temperature to rise in Odisha from March 18