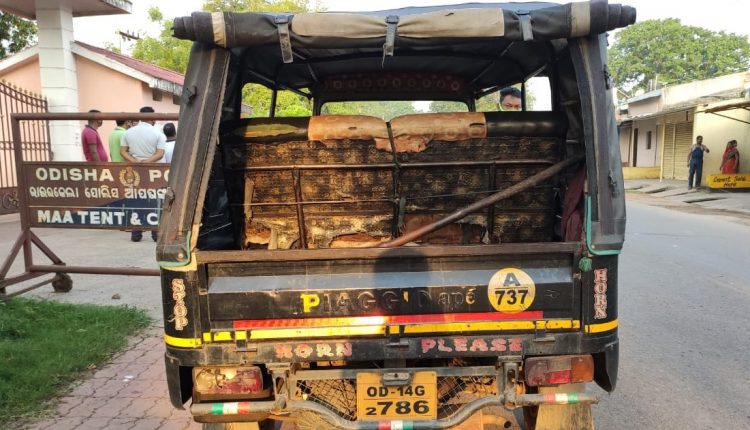 Rourkela: Odisha police today seized an autorickshaw laden with beef and arrested the driver at Bondamunda area in Rourkela Steel City. The accused sustained injuries while fleeing the scene.

The accused has been identified as Mohammad Sajid. He has been admitted to the Rourkela Government Hospital (RGH) for treatment.

According to reports, the beef containing in sacks was being illegally transported in an autorickshaw from Bisra to Rourkela. A team of Bajrang Dal, an RSS wing, spotted the vehicle while they were chasing vans which were loaded with cattle.

Source said the cattle were illegally being trafficked in four pickup vans from Kutra to Jharkhand. Acting on a tip-off, the Bajrang Dal activists chased four vehicles for detention. However, they failed to catch the vehicles as the railway level crossing gate was closed at Bondamunda after the cattle-laden pickup vans crossed it. With extreme disappointment while the right wing activists were returning from the place, they spotted an autorickshaw carrying a huge quantity of beef and stopped it.

After seeing the Bajrang Dal members, the terrified autorickshaw driver tried to flee the scene leaving the vehicle behind. When he started running on the railway track, he fell down and became unconscious.

The Bajrang Dal activists rescued the driver in critical condition and handed him over to police. The cops also seized the vehicle.

Source said that the beef was dumped by veterinary personnel following seizure.

Sarpanch among 91 persons test positive for COVID-19 in Odisha