Before cyclone FANI and now AMPHAN: Flag atop Puri Jagannath temple snaps off 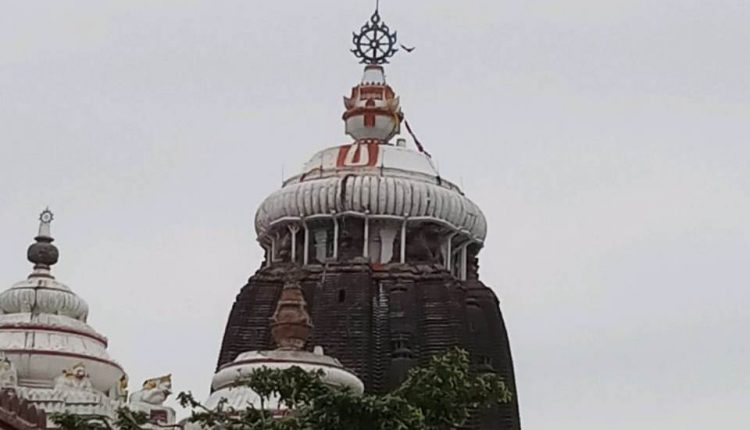 Puri: It seems to be a double whammy for people of Odisha. After the COVID-19 pandemic situation, an impending cyclone over the Bay of Bengal has left the people panicked. As if it was not enough, the Patitapabana Bana atop the famous Lord Jagannath temple snapping off has left many bewildered.

The holy flag was blown away by a strong wind in the afternoon ahead of the cyclone, which has been intensified into Super Cyclonic Storm over central and adjoining South Bay of Bengal.

Source said that among the holy flags affixed atop Srimandir, the Patitapabana Bana (prime flag) snapped off at around 2.05 pm after a strong wind blew over the centuries old temple during cloudy weather. Later, the flag was tied to the Nilachakra (blue wheel) by Chunara servitors at around 3.30 pm.

However, panic spread among people as well as devotees following the incident. The locals termed Patitatapabana Bana’s snapping off Nilachakra as ‘inauspicious’ event as they had encountered the similar incident during the period of Cyclone FANI last year. Some people also anticipated it as ‘bad sign’ during COVID-19 pandemic.

On the other hand, the servitors ruled out such remarks stating that Lord Jagannath saved people of Puri from the impending cyclone brewing in the Bay.

“It will not cause any adverse situation, rather Lord Jagannath  tweaked the direction of cyclone preventing Puri from devastation,” a Chunara servitor said.

Earlier on several occasions, the holy flag has snapped off and the servitors had expressed apprehensions about something bad happening in the future.

Last year, the Patitapabana Bana had snapped off due to gusty winds just a day before Cyclone FANI hit Puri coast in Odisha.

This year, the Patitapabana Bana had caught fire for the first time recently amid pandemic situation. On March 19 evening, the holy flag tied to the metal wheel was reportedly reduced to ashes after it caught fire from a lamp that was placed near Nilachakra.

As per temple servitors, it was the first such incident in the history of the temple.