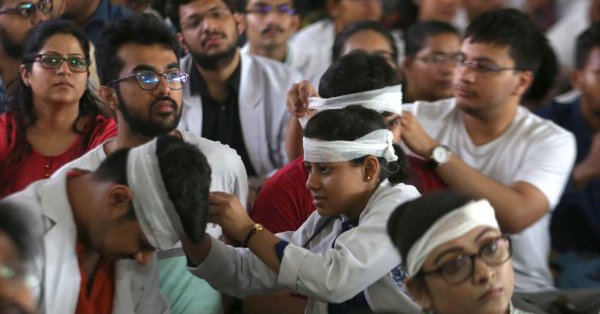 New Delhi: The Resident Doctors Association (RDA) of the All India Institute of Medical Sciences (AIIMS) in Delhi on Saturday called off its day-long strike announced in support of the protesting medicos in West Bengal

Announcing the decision, the RDA gave West Bengal Chief Minister Mamata Banerjee a 48-hour ultimatum to meet the demands of protesting doctors in her state.

“RDA AIIMS issues an ultimatum of 48 hours to West Bengal government to meet the demands of striking doctors there, failing which we will be forced to resort to an indefinite strike at AIIMS, New Delhi. We hope that our colleagues across the nation will join us in this hour of need,” read a statement from the RDA.

The doctors associated with the Association, however, said that they would continue to wear red-stained bandages and helmets as a sign of protest.

The ultimatum came a day after Banerjee gave the protesting doctors in her state four hours to withdraw their strike and return to work or vacate the hostels.

The doctors of the Safdarjung Hospital too withdrew their strike. However, other hospital associations, including the Federation of Resident Doctors Association (FORDA)went on strike on Saturday as a mark of solidarity with the protesting doctors in West Bengal.