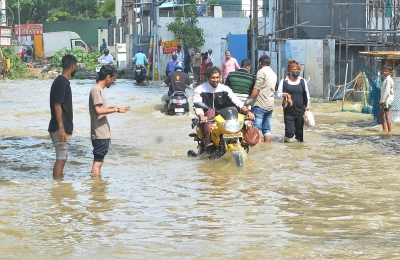 Bengaluru: The Indian Meteorological Department (IMD) has predicted continuous rainfall in Bengaluru for next five days. Yellow alert was issued on Wednesday.

Sources said that the people will have to bear with the present condition for a few more days and they be ready for the worst in the coming days in view of the more rail alert. The authorities are crossing their fingers as the staff are working day and night to respond to the flood-affected people.

Those living in ground floors in the rain-affected areas have been forced to shift to their relatives and friends’ houses. The people, who are living on the first floor and above are forced to commute on tractors and boats for emergencies. They are also facing the problem of shortage of drinking water. The situation is likely to turn serious with more rainfall in the coming days.

According to official statistics, 85 regions and 2,000 houses in Bengaluru have been inundated due to heavy rain. A total of 1,500 sheds have also come under water, forcing the labourers to shift to safer places. 22,000 vehicles have been damaged and 30 apartments have been surrounded by the flood water.

The two zones in Bengaluru’s East, Mahadevapura and Bommanahalli, which house major IT companies, have been affected the most. Mahadevapura MLA Aravind Limbavali stated that all the water from the city flows through Mahadevapura resulting in the present situation. Encroachments were being removed to allow water to flow out of residential localities on a war footing basis, he stated.

The state has recorded nine deaths till date due to the rain related tragedies. Chief Minister Basavaraj Bommai, who took up rounds in the rain-affected areas of Bengaluru on Monday night, appreciated the efforts of MLA and officials for working day and night for three days to give relief to the flood-affected people.

Husband-wife stab each other to death in Delhi