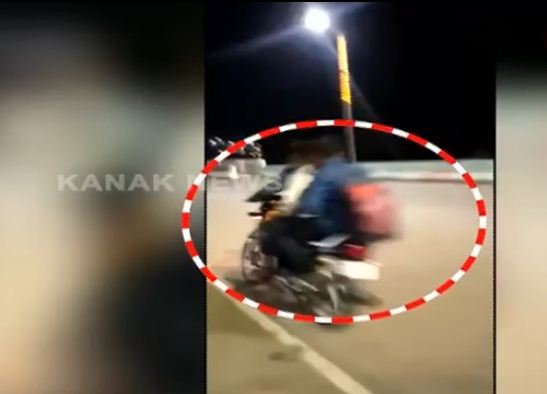 Berhampur: As many as three men travelling on a motorcycle met with an accident after the driver tried to escape vehicle checking by police on an overbridge under Gosani Nuagaon police limits in Odisha’s Berhampur town, last evening.

As per reports, the vehicle checking was underway by police to impose fine on traffic rule violators. As a cop saw the trio travelling on the two-wheeler thereby violating the traffic norms, he tried to intercept them.

The driver of the motorcycle managed to escape, only to be stopped by another cop standing few metres ahead of the checking spot.

As the policeman waylaid the three, the driver lost control over the wheels, following which the vehicle hit the cop while the three fell from the two-wheeler and sustained injuries.

The victims have been admitted to the MKCG Medical College and Hospital here for treatment.

A CCTV footage of the incident has gone viral of various social media platforms.