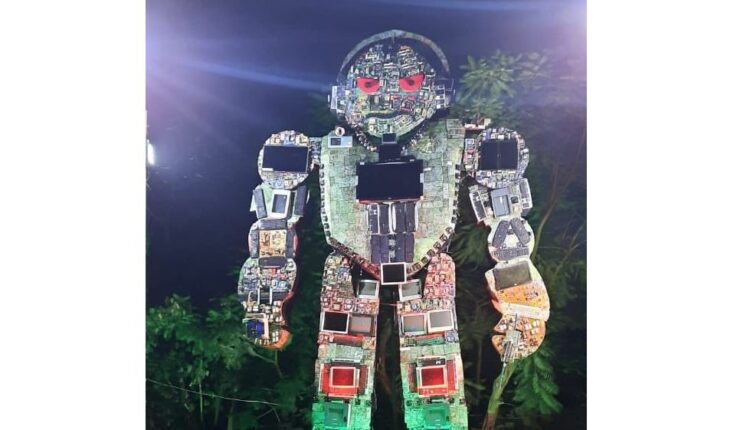 Berhampur: Making the best out of waste, a group of students of ITI Berhampur in Odisha’s Ganjam district have developed a robot, which is apparently the tallest e-waste sculpture in the country.

The 30-feet-tall robot weighing three tonne has been made out of electronic waste such as toys, PCB, printer, printer cartridge, RAM, keyboard, mouse, mobile and CD player. Trainees from electrician, electronics and painter trades of the Government-run  institute have developed the stricture after collecting e-waste from the Silk City.

ITI Berhampur principal Dr Rajat Kumar Panigrahy said the sculpture is a an effort by the students to promote scientific management of e-waste.

“As e-waste generation is very high in the current age and they comprise many toxic elements, including copper, liquid crystal, lithium, mercury, nickel, selenium, arsenic and barium, the robo is an effort to spread awareness among the people for environmental protection and proper management of e-waste. When e-waste is not properly managed, the risks of air and water pollution become significantly higher,” said Hindustan Times quoting Panigrahy.

Last year, an open-air scrap sculpture park developed in the institute was adjudged as the largest of its kind in Asia, making its way to Asia Book of Records. The scrap sculpture park spread over 10,000 square metre has around 20 sculptures, including Iron Man, Terminator, King Kong, a giant guitar, a dolphin, a helicopter and a hanging fish.

Diwali 2021: These six sweets must to add cheer to celebrations

FANI: Odisha ITI students to be deployed for inspection of…