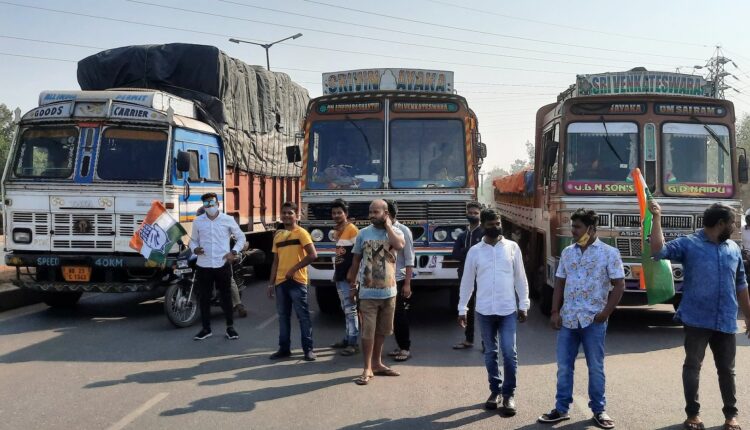 Bhubaneswar: Road blockade and subsequent disruption of vehicular movement marked ‘Bharat Bandh’ in Odisha capital today. The bandh call given by the farmers was supported by different political parties and trade unions in the city.

Members of various farmers’ associations and trade unions staged rail roko holding banners and placards at Bhubaneswar Railway Station affecting movement of trains temporarily. Hundreds of examinees heading towards Andhra Pradesh for B.Ed exam were stuck at the railway station due to the incident. Government Railway Police (GRP) later picked up the protestors from the track.

Similarly, roads were blocked by the agitators at Master Canteen Square, on National Highway near Jayadev Vihar and Satsang Vihar. Hundreds of vehicles remained stranded on road due to the blockade while commuters had a harrowing experience.

#BharatBandh: Hundreds of vehicle remain stranded on NH near Jayadev Vihar in #Bhubaneswar due to road blockade by protestors. pic.twitter.com/aWK5m4svJW

Many passengers were stranded at the Baramunda Bus Stand here as buses remained off the roads due to the bandh.

There has been five rounds of talks between the government and farmers with no breakthrough. Both the sides have agreed to continue the dialogue tomorrow.

In service for 43 years, General Bipin Rawat was on a…