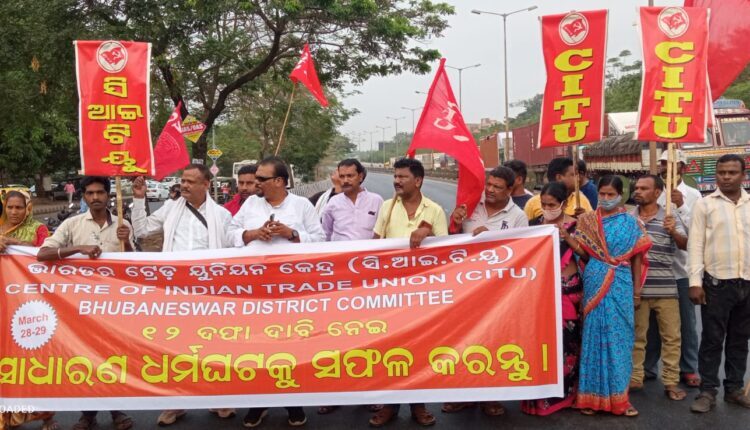 Bhubaneswar: The first day of the two-day Bharat Bandh observance by trade unions witnessed vehicular movement being affected across Odisha.

Hundreds of vehicles, including trucks, remained stranded on both sides of National Highway near Jayadev Vihar in Bhubaneswar as the agitators blocked road.

Scenes were similar at several places in other parts of the state as the agitators resorted to picketing and sloganeering.

In view of the bandh, previously scheduled examinations of Utkal University, Rama Devi Women’s University and Sambalpur University on March 28 and 29 have been postponed.

Notably, a joint forum of central trade unions has announced to observe a two-day nationwide strike on March 28 and 29 protesting against government policies. The All India Unorganised Workers and Employees Congress has extended its support to the nationwide strike.

However, the Bharatiya Mazdoor Sangh has distanced itself from the strike call and said that it will not support the strike.

On the other hand, the All India Bank Employees Association has announced to lend its support to the nationwide strike. The bank unions will participate in the strike protesting against the Banking Laws Amendment Bill 2021 and the Centre’s plan to privatise public sector banks (PSBs).

The State Bank of India has already issued a statement saying that banking services may be affected on March 28 and 29.

Workers from other sectors such as steel, oil, telecom, coal, postal, income tax, copper, and insurance are likely to join the strike.

The employees’ unions in railways and defence sector may make mass mobilisation supporting strike. Roadways, transport workers and electricity workers have already announced to participate in the strike.