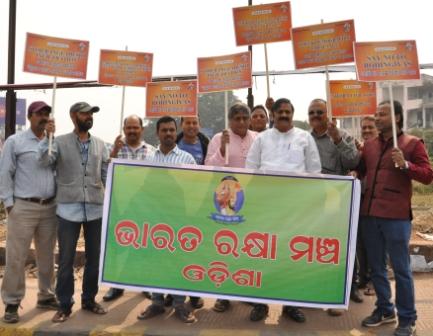 Bhubaneswar: The Bharat Raksha Manch held a protest today with the demand for extending the exercise of holding the National Register of Citizens (NRC) in Odisha. The first part of the draft of the NRC for Assam was published on January 1 this year.

The NRC is an exercise that is supposed to help identify and segregate names of illegal Bangladeshi migrants. Being conducted under the supervision of the Supreme Court, the exercise faced a lot of opposition in the State.

The National Register of Citizens was first prepared in 1951 in Assam after the conduct of the Census of that particular year. The Register included particulars of all the persons enumerated during that Census. The Manch has been demanding that NRC should be made mandatory in all the states where sizeable illegal Bangladeshi immigrants are present. In due time, the nation should have a detailed and composite Register of its Citizens.

A delegation of the Manch will submit a memorandum to the Governor of Odisha in this regard. Speaking on the occasion, Murali Manohar Sharma, Convener of the Manch said that Odisha is one of the most vulnerable and soft state in the matter of illegal Bangladeshi immigration. With its long coastline, largely unmonitored in spite of the dozen Marine Police Stations, the State has become the landing spot of illegal immigrants. The rising presence of Bangladeshis in different cities of the State has been brought to the notice of the State government many times. The Chief Minister has himself admitted to the presence of 3800 illegal Bangladeshi immigrants in the State Assembly, but nothing has been done to deport them.

Anil Dhir, the National Secretary of the Manch has said that the rising crime rate in the state is largely due to this illegal population. They engage in theft, dacoity, highway robbery, cattle smuggling, human trafficking, temple thefts, and commercial sex rackets besides being a major threat to the internal security. The NIA too has put Odisha in its scanner as there are many sleeper cells of HUJI, LET and the Jamaat which are active here.

The State administration should undertake a major exercise to detect and deport these illegal Bangladeshis. In spite the directive by the Centre in the matter of Rohingyas, the State government took no action. The mushrooming of Madrasas in the state is an indicator of the increase in radicalization.