Bhavina Patel: A journey from setbacks to success 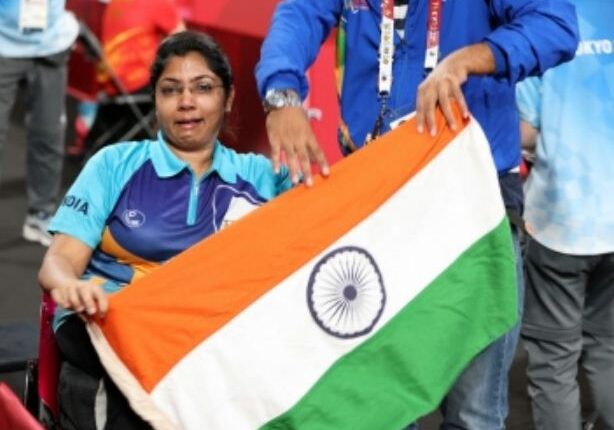 Mumbai: Try and try again till you succeed, seems to be the motto of Indian para table tennis player Bhavina Patel. The 34-year-old, who on Friday assured India its first medal in table tennis at the Paralympic Games, made her international debut in 2009 at Jordan and won her first medal in 2011, a silver by beating her Chinese opponent at the Para Table Tennis Thailand Open.

There was no stopping her as Bhavina won a historic silver medal, India’s first, in Asian Regional Championship in 2013. She continuously playing international tournaments in various countries like Jordan, Taiwan, China, South Korea, Germany, Indonesia, Slovenia, Thailand, Spain, the Netherlands, and Egypt but a gold medal continued to elude her.

Bhavina continued to try, working hard to improve her game and she finally bagged her first gold medal — in singles at the International Para Table Tennis Championship in Bangkok, Thailand in 2019.

In between, the 34-year-old Bhavina continued to suffer setbacks. The 34-year-old ESIC employee based at Ahmedabad had qualified for the Rio 2016 Paralympics but could not play because of a technicality. She was India’s best hope in para TT at the 2010 Commonwealth Games but lost in the quarterfinals. But Bhavina maintained her composure and continued to try harder, and harder.

On Friday at the Tokyo Olympics, Bhavina, who came through a three-player group to qualify for the pre-quarterfinals, The 34-year-old Gujarat-based paddler defeated the defending champion and veteran Borislava Peric of Serbia 11-5 11-6 11-7 in just 18 minutes in their women’s singles Class 4 category to reach the semifinals. Earlier in the day, she had to work hard to quell Brazil’s Joyce de Oliveira in straight games — the match proving again that nothing has come easy to this fighter from Gujarat.

Having taken up table tennis around 2004 to maintain fitness, the sport became her passion. After three years of hard work and practice, she won her first national title in Para Table Tennis Nationals in Bangalore in 2007 and that set her on a course that has taken her to the Tokyo 2020 and a place in India’s Paralympic Games history as the first table tennis player to win a medal.

But Bhavana was not so dedicated and hard-working initially.

Born on November 6, 1986, at Sundhiya village, Vadnagar, in Mehsana district of Gujarat, she got infected by poliomyelitis when she was 12 months old. Coming from a middle-class background, her father could not get her treated when she was young. Though he had to take care of a family of five, he managed to get Bhavana operated upon at Visakhapatnam in Andhra Pradesh but the surgery did not yield desired results as Bhavana was careless and did not follow the rehab procedure properly.

Confined to a wheelchair since a young age, Bhavana studied in regular schools in Sundhiya village. In 2004 her father got her enrolled in the Blind People’s Association, Ahmadabad, where she did a course in computes and also pursued her graduation via correspondence.

It was at the Blind People’s Association, Ahmedabad that her life underwent another change. She was introduced to coach Lalah Doshi and she soon transformed into a table tennis player, starting a journey that has taken her to the Tokyo Paralympics and a place in Indian sports history.