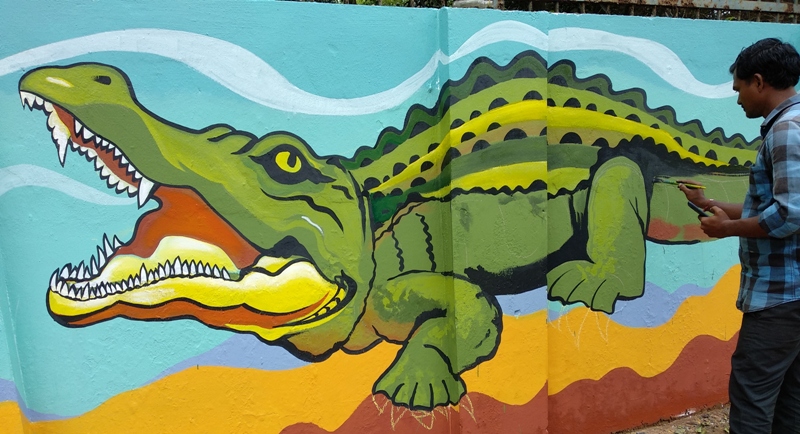 Bhubaneswar: As the city is gearing up to look like a blooming flower for the upcoming Men’s Hockey World Cup 2018, the painting of Bhitarkanika on walls enhanced the beauty of the Smart City here.

The international sports events have always helped to get various themes painted on the walls across the city through the Street Art and Mural Project (STAMP). And this time, the famous mangrove forests of Bhitarkanika has started appearing on the walls of the Institute of Minerals and Materials Technology (IMMT) with a beautiful depiction of its wildlife and environment.

The Bhitarkanika theme by Rashmiranjan Jena and his co-artists on the IMMT walls after Regional Museum of Natural History has already started drawing people’s attention. The crocodiles, birds, red crabs and Olive Ridley turtles have begun emerging from the line drawings and taking shapes of the life forms through painting.

When the entire globe is going to converge at the Kalinga Stadium Sports Complex for the Odisha Men’s World Cup Hockey-2018, the best-kept secrets of the State are also getting reflected by the STAMP with the brush strokes by the talented artists from the Bhubaneswar Municipal Corporation (BMC).

“I thought of creating Bhitarkanika ecosystem on the walls near IMMT as it is one of the most beautiful mangrove ecosystems of the world and also known for its Gharial crocodiles, bird species, sea turtles and the red crabs, found along the Odisha coast,” said Jena.

The artist, an alumnus of the oldest art institute of Odisha, Khallikote Art College, has nearly 20 artists in his team. The team comprises professional artists who have taken up projects on their own and also students including post-graduate students from leading art colleges across the state.

“We have infused almost all major elements of Bhitarkanika into the wall-painting starting from the eggs of the crocodiles, hatchings coming out of the eggs, birds of the mangrove paradise and also the famous red crab, which is famous along the entire coast of Bay of Bengal along Odisha coast. We have also visualised the interrelationship of the various wild animals and the beautiful bonding through our limited scope on the walls,” Jena explained.

Pradipta Sahoo, an artist of the team working with Rashmiranjan, said “a forest ecosystem is a beautiful way to represent the relationship of the plants, animals and the environment. We tried our best to recreate the Bhitarkanika story through our art.”

Another painter Komal Patel said “Odisha is a treasure of untapped tourism destinations and beautiful places among the natural forests and virgin beaches. We need to do such promotion more so that the international guests would find it more interesting and tend to visit the places. We can have more such paintings for other natural paradises like Similipal Biosphere Reserve.”