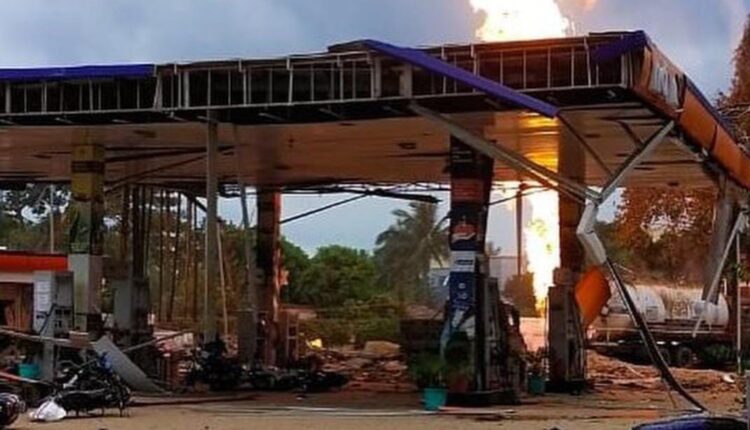 Aska: Three days after the massive explosion at a petrol pump near Governor’s House in Bhubaneswar, the funeral of one person, who is still missing following the incident, has been held without body.

Even as the family members of the missing person identified as Simanchala Parida from Ganjam district were hopeful that he was alive, no clue of his physical existence in the past three days and recovery of a wallet containing his photograph and scattered human flesh from the spot after the tragic incident forced them to believe that he is no more.

The family members performed last rites of Simanchala without body at his Gahangu village under Aska Block in Ganjam district on Saturday.

It was a heart-wrenching scene when a symbolic body made of paddy straw was carried to the crematorium in a procession at his native place and the family conducted a symbolic cremation as per Hindu rituals..

Simanchala Parida was the only son among 7 children of his parents. He is survived by his wife Premalata, one son Premananda (9-year-old) and a 4-year-old daughter Manisha.

His father Trinath Parida was working in a coal mine. He had raised the family and children living in extreme poverty. After retirement, he was residing at the village. Simanchala was engaged at a firm in Kolkata after completion of his Diploma degree. On October 6, a day before the explosion tragedy, he had joined his new job after returning from Kolkata.

However, he was yet to be traced since October 7 after the blast jolted Odisha capital. His family members searched him everywhere in Bhubaneswar, but got no clue of his whereabouts.

On Friday, police found Simanchala’s photograph, his ATM card from a wallet and scattered human flesh during search at the incident site. With the recovery, the family accepted his death in the explosion.

The Commissionerate Police has sent the pieces of flesh recovered at the site to the forensic laboratory for the test. The police also decided to conduct DNA test by collecting samples of Simanchala’s family members for confirmation.