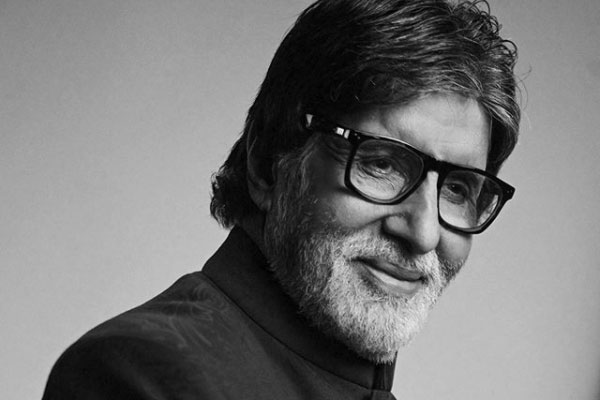 New Delhi:  A few days before turning 78 on Sunday, Bollywood Shahenshah Amitabh Bachchan signed a new multilingual mega project, co-starring Telugu superstar Prabhas and Bollywood superstar Deepika Padukone. He already has a handful of films in his kitty right now, and he has just returned as host of the popular quiz show, Kaun Banega Crorepati (KBC).

At 78, Big B’s aura only grows brighter with every passing year. The iconic actor shows no sign of slowing down.

In his five decade-plus career, Big B has conquered it all — stereotypes, career slump, generation gap, health problems, even Covid-19, and has emerged stronger and successful each time.

Indeed, Big B is among Bollywood’s busiest superstars right now, also the most adaptable. Having lorded over the big screen with a larger-than-life image for over five decades, he was quick to realise the power of the OTT platform. With “Gulabo Sitabo” releasing digitally earlier this year, Bachchan was doing exactly what he did with KBC two decades ago. He was staying relevant by connecting with a new generation of fans, by taking his presence to a medium compatible to their taste and liking.

In all this, he maintains the earnestness of a newcomer. He was the first one to start shooting when unlock was implemented. He dived back into work as soon as he recovered from coronavirus, and is already juggling between multiple projects.

“The work comes in leaps and bounds and the need to do it stays with us ever… so we work and continue till time lasts,” the actor recently blogged. The line gives a glimpse of his passion and dedication towards work.

According to trade analyst Girish Johar, the fascination for Amitabh Bachchan among fans young enough to be his grandchildren stems from his ability to remain a timeless enigma despite his mass appeal.

“The kind of work he is doing, and the kind of image and brand power he brings to a particular project, be it a film or a social cause, he lends a lot of credibility, prestige and honour. Words fall short for him. We are truly blessed to be witnessing his journey,” Johar said.

“Big B is a living legend. He is an icon unto himself. There are certain people who are beyond the comprehensive trajectory or stardom. The way he has managed his career, his ups and downs including his health and business, the way he has managed to withhold and withstand all that is beyond words,” Johar added.

That streak of resilience probably stems from the struggles that tempered him in his early years. There were rejections, followed by a phase when he made his mark as a promising actor, which was soon overshadowed by the pinnacle of superstardom. When the superstar tried his hand at film entrepreneurship, he went bankrupt, only to bounce back and claim supremacy as a global icon.

Yet, funnily his tall and lanky frame coupled with the signature baritone, was deemed unsuitable for Bollywood’s image of a perfect hero when he entered the industry. These factors were pointed out as flaws, which now render an edge to his image.

If his superstardom of the seventies and eighties rested on sticking to trademark Angry Young Man roles, his current phase has been all about not shying away from taking risks, experimenting and reinventing. That ability to change with time is a factor that makes his success story so distinct.

“He has always stood out, and always tried something different. He is building his persona everyday. He is always one step ahead. Now that he is on OTT he is everywhere, from movies to television to the digital space. It’s like a combination of everything. So, people are excited to see him,” said trade analyst Rajesh Thadani.

Big B started his journey in showbiz as one of the protagonists in KA Abbas’ “Saat Hindustani” (1969), and then notably went on to feature in Hrishikesh Mukherjee’s “Anand” (1971) starring Rajesh Khanna. His tryst with greatness started with Prakash Mehra’s “Zanjeer” in 1973, the film that established his image as Hindi cinema’s Angry Young Man.

Towering roles in “Deewar” (1975), “Sholay” (1975) and “Don” (1978) cemented his position in the industry. While his intense, larger-than-life image has made way to more realistic avatars in recent years (“Black”, “Paa”, “Piku”, “Pink” and “Badla”), his ability to regale with characters of myriad shades continues.

“His discipline and punctuality are legendary. His dedication to the craft is awe-inspiring. Even today he carries with him the enthusiasm of a child. I have seen him sit out in biting, sub-zero weather in Poland during the shooting of ‘Chehre’. He would wait after all his work was done just to watch others at work. Such is his love for the craft,” said producer Anand Pandit.

As Big B’s tryst with honing his craft with each project continues, here’s a  list of  some of his projects to look forward to:

BRAHMASTRA
A superhero adventure, Amitabh Bachchan will feature in the Ayan Mukerji-directed film with Alia Bhatt, Ranbir Kapoor, Nagarjuna and Mouni Roy. The project is being billed as the first part in a trilogy.

JHUND
Directed by “Sairat” maker Nagraj Manjule, “Jhund” is reportedly based on the life of Vijay Barse, who is the founder of Slum Soccer. Big B plays the role of a professor who channelises street children to build a football team.

UYARNDHA MANITHAN
Bachchan makes his debut in Tamil with “Uyarndha Manithan”, which also stars actor-director SJ Suryah. It is a bilingual film.

UNTITLED FILM WITH PRABHAS AND DEEPIKA PADUKONE
Big B will star with Deepika Padukone and Telugu superstar Prabhas in a multilingual mega production for the big screen. The yet-untitled film is slated to release in 2022.

AANKHEN 2
The film is a sequel to the 2002 heist thriller “Aankhen”. It will be directed by Anees Bazmee.