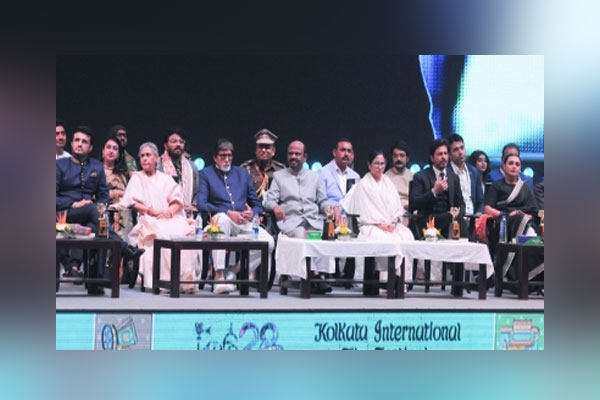 Kolkata: Bollywood megastar Amitabh Bachchan’s remarks about questions being raised on “civil liberties” and “freedom of expression” at the inauguration function of the 28th Kolkata International Film Festival (KIFF) on Thursday evening is being described by the BJP as a “clandestine admission of the misrule and trampling of democratic rights in West Bengal”.

The BJP leaders have also complimented Big B for showing the courage to highlight the issue while he was sharing the same dais with Chief Minister Mamata Banerjee at the KIFF’s inauguration programme. “Even now, I am sure my colleagues on stage would agree that questions are being raised on civil liberties and freedom of expression,” Bachchan said.

BJP’s IT cell chief and the special observer for the party in West Bengal, Amit Malviya also issued a Twitter message claiming that Big B’s comments were more appropriate as they were being said in Kolkata. Amitabh Bachchan’s words couldn’t have been more prophetic since they were spoken in Kolkata, with Mamata Banerjee on the dais. It is like holding a mirror to the tyrant, under whose watch India witnessed the bloodiest post poll violence. She has tarnished the image of Bengal…”

In fact, the star-studded audience at the KIFF’s inaugural function on Thursday evening was a bit taken by the veteran actor’s references to the issues of “civil liberties” and “freedom of expression”. The actor is otherwise known for dodging political issues in public forums.

Prior to his speech on Thursday evening, Bollywood superstar Shah Rukh Khan too made a loaded statement referring to how social media was often driven by a narrowness of views that enclose collective narrative and makes it more divisive and destructive.