INDIAINDIA & BEYOND
By Sambad English Bureau On Jul 17, 2019 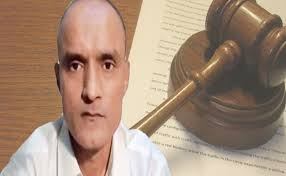 The Hague: In a huge victory for India, the International Court of Justice (ICJ) on Wednesday ordered Pakistan not to execute Kulbushan Jadhav and asked it to reconsider the sentence awarded to him by a military court.

The world court also directed Pakistan to grant consular access to Jadhav, while holding that it had “breached” the Vienna Convention in this regard by denying him this right.

The court rejected all the objections of Pakistan, including one unanimously on the admissibility of the case and also the claims by Islamabad that India had not provided the actual nationality of Jadhav.

The ICJ, in its detailed judgement read out by its President said it was satisfied that Jadhav, who was arrested in March 2016 and sentenced to death by a military court on charges of spying in April 2017, was an Indian national.

It observed that even Pakistan, along with India, had acknowledged the fact that Jadhav was an Indian national.

The court, in its ruling by 15-1, declared “a continued stay of execution” on Jadhav, saying it “constitutes an indispensable condition for the effective review and reconsideration of the conviction and sentence” of the accused.

It said it “finds that the appropriate reparation in this case consists in the obligation of the Islamic Republic of Pakistan to provide, by the means of its own choosing, effective review and reconsideration of the conviction and sentence of Mr. Kulbhushan Sudhir Jadhav, so as to ensure that full weight is given to the effect of the violation of the rights set forth” of the Vienna Convention on consular access.

The court had in May 2017 ordered a stay on Jadhav’s execution till the final verdict in the case after India approached it against the Pakistani military court’s award of death sentence in an opaque trial.

The court found that Pakistan deprived India of the “right to communicate with and have access” to Jadhav to “visit him in detention and to arrange for his legal representation, and thereby breached the obligations incumbent upon it under the Vienna Convention on Consular Relations.

The world court said that by not notifying the appropriate consular post of India in Pakistan without delay of Jadhav’s detention, India was deprived of the right to render assistance provided for by the Vienna Convention to the individual concerned.

Pakistan “breached the obligations incumbent upon it” under the Vienna Convention on Consular Relations, it observed.

The court said Pakistan is “under an obligation” to inform Jadhav “without further delay of his rights and to provide Indian consular officers access to him” in accordance with the Vienna Convention on Consular Relations.