Biju Patnaik cycled all the way to Peshawar! 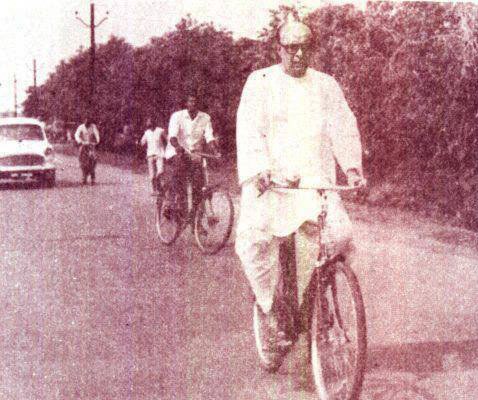 Biju Patnaik had a heroic personality and had achieved name and fame through sheer hard work, determination and perseverance  alone. It is a well known fact that he was a daring and dashing pilot who had many heroic anecdotes to narrate. But did you know that he also loved cycling? He was so fond of cycling that many a time, he was spotted cycling his way to the state Secretariat on a bicycle.

Also Read: Why Indonesia is indebted to Biju Patnaik…

In 1932, when Biju Patnaik was a student in Ravenshaw College, he embarked upon an adventurous journey on a bicycle and cycled all the way from Cuttack in Odisha to Peshawar in Pakistan, a distance of 4500 miles with two of his friends Amar and Bhramarbar on a ‘Visit India Mission’. In those days when there was no good road communication, it was a big challenge for him but as they say, nothing is impossible for a willing heart. Without fearing the then jungle route, he completed this mission successfully.

Caravan ‘Swaraksha’ to raise awareness on human trafficking in Odisha